We now use https by default for all Facebook users. This feature, which we first introduced as an option two years ago, means that your browser is told to communicate with Facebook using a secure connection, as indicated by the “https” rather than “http” in https://www.facebook.com. This uses Transport Layer Security (TLS), formerly known as Secure Sockets Layer (SSL), and makes the communication between your browser and Facebook servers more secure.

More than a third of users had enabled the feature following its introduction, while we worked behind the scenes to make it better. We’ve focused on making it faster throughout the world and improving its compatibility with platform applications.

Now that https is on by default, virtually all traffic to www.facebook.com and 80% of traffic to m.facebook.com uses a secure connection. Our native apps for Android and iOS have long used https as well.

Migrating to https by default

Switching to https is more complicated than it might seem. It’s not simply a matter of redirecting from http://www.facebook.com to https://www.facebook.com. We thought it’d be useful to walk through some changes we’ve already made and some improvements that we’re still working on.

The graph below shows the adoption of https on Facebook since April 2011. Adoption reached about 35% organically before we started actively migrating users to https by default. 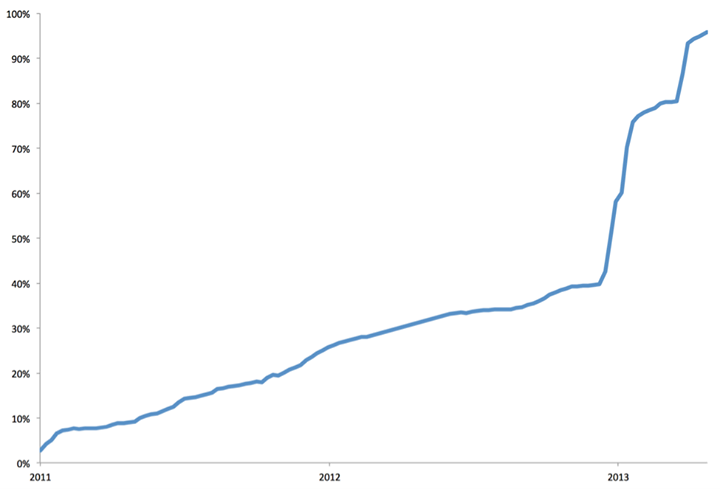 For example, if you’re in Vancouver, where a round trip to Facebook’s Prineville, Oregon, data center takes 20ms, then the full handshake only adds about 40ms, which probably isn’t noticeable. However, if you’re in Jakarta, where a round trip takes 300ms, a full handshake can add 600ms. When combined with an already slow connection, this additional latency on every request could be very noticeable and frustrating. Thankfully, we’ve been able to avoid this extra latency in most cases by upgrading our infrastructure and using abbreviated handshakes.

We’re continuing to build on our implementation of https and have a few improvements that we’re planning to launch this fall:

Turning on https by default is a dream come true, and something Facebook’s Traffic, Network, Security Infrastructure, and Security teams have worked on for years. We’re really happy with how much of Facebook’s traffic is now encrypted and are even more excited about the future changes we’re preparing to launch.