Every day people upload more than 350 million photos to Facebook as of December 2012 and view many more in their News Feeds and on their friends’ Timelines. Facebook stores these photos on Haystack machines that are optimized to store photos. But there is also a deep and distributed photo-serving stack with many layers of caches that delivers photos to people so they can view them.

We recently published an academic study of this stack in SOSP. In this post, we describe the stack and then cover four of our many findings:

1. How effective each layer of the stack is.

2. How the popularity distribution of photos changes across layers.

3. The effect of increasing cache sizes. 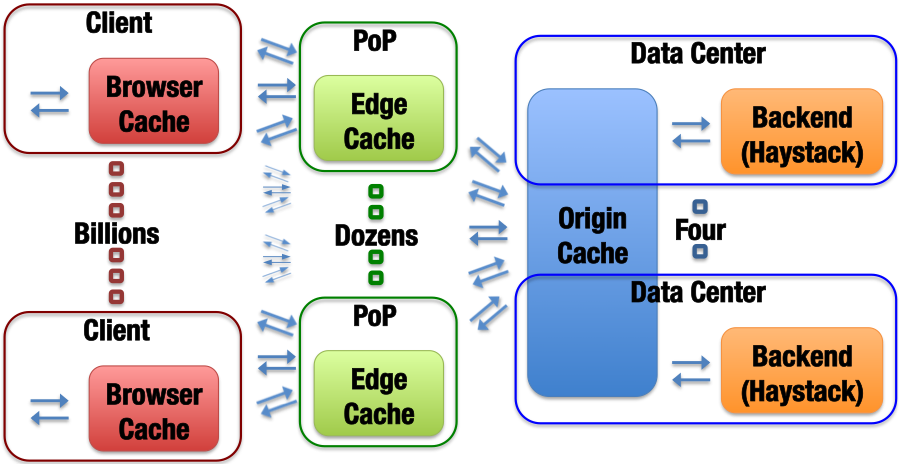 The photo-serving stack has four layers: browser caches, edge caches, origin cache, and Haystack backend. The first layer of the stack is the browser cache on peoples’ machines. If someone has recently seen or downloaded a photo, that photo will likely be in their browser cache and they can retrieve it locally. Otherwise, their browser will send an HTTPS request out to the Internet.

That request will be routed either to our CDN partners or to one of Facebook’s many edge caches, which are located at Internet points of presence (PoPs). (In the paper and this blog post, we focus on what happens in the Facebook-controlled stack.) The particular edge cache that a request is routed to is encoded in the request’s URL. If the requested photo is present at the edge cache, then it returns the photo to the user’s browser, which will store it in its local cache. If the photo is not present at the edge cache, it is requested from the origin cache.

In our study, we collected a month-long trace of requests from non-mobile users for a deterministic subset of photos that was served entirely by the Facebook-controlled stack. The trace captures hits and misses at all levels of the stack, including client browser caches. All analysis and simulation is based on this trace.

From our trace we determined the hit ratio at each of the layers and the ratio of total requests that travels past each layer. Each layer significantly reduces the volume of traffic so that the Haystack backend only needs to serve 9.9% of requested photos.

This is a significant reduction in requests, but we can do even better.

It is well known that the popularity of objects on the web tends to follow a power law distribution. Our study confirmed this for the Facebook photo workload and showed how this distribution shifts as we move down layers in the stack. We counted the number of requests for each photo at every layer, sorted them by popularity, and then graphed them on a log-log scale. The power law relationship shows up as linear on this scale.

As we move down the stack, the alpha parameter for the power law distribution decreases and flattens out. The distribution also changes to one that more closely resembles a stretched exponential distribution. 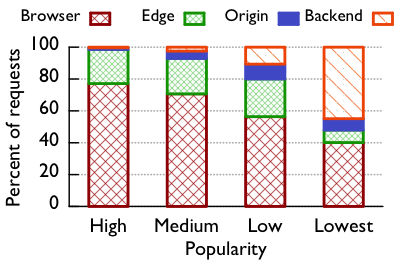 Unless your entire workload fits in the current cache, a larger cache will improve hit ratios — but by how much? To find out we took our trace to each layer and replayed it using a variety of different cache sizes. We share the results for one of the edge caches and the origin cache here. 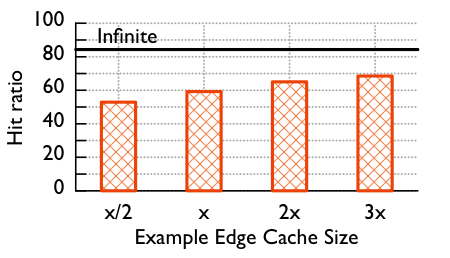 The infinite line in the graphs shows the performance of a cache of infinite size, i.e., one that can hold the entire workload. It is an upper bound on the possible hit ratio and it shows us there is still much room for improvement. 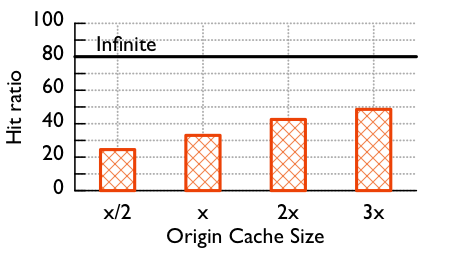 Larger caches are not the only way to improve hit ratios — being smarter about what items you keep in the cache can also have an effect. We used our trace to test the effects of using a variety of different caching algorithms. We published results for the following algorithms:

• FIFO: A first-in-first-out queue is used for cache eviction. This is the algorithm Facebook currently uses.

• LRU: A priority queue ordered by last-access time is used for cache eviction.

• LFU: A priority queue ordered first by number of hits and then by last-access time is used for cache eviction.

• Clairvoyant: A priority queue ordered by next-access time is used for cache eviction. (Requires knowledge of the future and is impossible to implement in practice, but gives a more accurate upper bound on the performance of an ideal caching algorithm.)

First, how do the different algorithms stack up at an edge cache?

We see even more pronounced effects at the origin cache.

Based on our trace data, the S4LRU algorithm again gives the best results. (We tested quite a few different caching algorithms that are less common than LRU and LFU but did not publish results for them because S4LRU outperformed all of them in our tests.) It increases hit ratio from 33.0% to 46.9% based on our trace data. At twice the current size, our data predicts that S4LRU can provide a 54.4% hit ratio, a 21.4% improvement over the current FIFO cache.

Qi Huang gave a talk on this work at SOSP. The slides and a video of the talk are on the SOSP conference page. There are also many more details in our paper.