Before we applied to join Facebook’s engineering team in London, we met a bunch of Facebook engineers but still had questions about what actually joining the team would look like: how did the recruiting process work, what preparation did interviews require, what should we expect once we joined, etc.

When we’re out talking to candidates today, we often get asked the same sort of questions, so we want to share our experiences with you and talk about what we learned during the process so you feel ready to nail your interview. 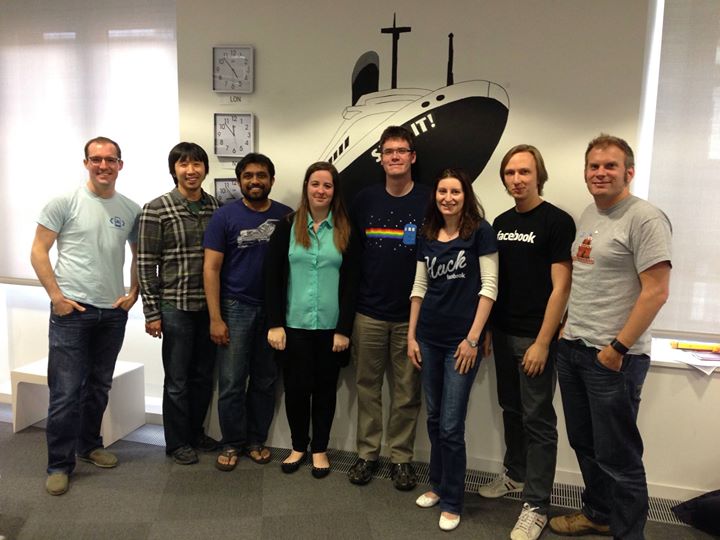 Irina: Last autumn I went to several Facebook events in London, where I had the opportunity to talk to a lot of people about their work here and what they love about it. Their enthusiasm made me think, “Hey, I’d really like to work here!” And here I am several months later.

Elena:I also started thinking about applying after meeting some Facebook engineers at London Droidcon in October. At that time I was working on my own startup as an Android developer, and I had the chance to chat with them about our apps and what the development environment is like at Facebook. I loved the energy everyone had and how they felt about their job. When I decided to leave my previous job in January, Facebook was the first option that came to mind.

Elena: The process was really fast for me, and I didn’t prepare too much for the interviews. I read through some of the problems I solved during college and tried to solve them again on paper. It’s amazing how different coding feels when you can’t insert lines anywhere.

Irina:I also practiced solving some interview questions on paper, as well as trained on Top Coder arena. I found it really helpful to simulate an interview with a friend midway through the preparation process. In my case it was my husband, who offered to play the interviewer on one occasion, and his feedback was invaluable. This experience had two outcomes for me: first, I became aware of how important it is to express my thought process while solving a problem, and second, the interview process felt more familiar. I also felt more confident about my technical skills.

Irina:I felt a lot of pressure during the first on-site interview, but I started enjoying myself with each interview that followed. It helped a lot that the interviewers were very open and that their purpose was to see what I could do and not ask tricky or blocking questions. But most importantly, they let me ask questions about their work and the company.

Elena: For me, it helped a lot to explain what I was thinking while solving the questions. Saying what you are thinking aloud may help you to re-think some things. Don’t be afraid of changing your code during your interview–if something is wrong, fix it! Also, being able to ask the interviewers questions about their jobs helped to calm and clear my head between the interviews.

One down, five to go

Irina:I’ll always remember how I felt after my first on-site interview. It was the most challenging I’d ever had, both technically and emotionally. My first thought was that I failed it big time, and I still had to go through three more coding interviews. At that point I decided to stop thinking about the outcome and focus on what I enjoy most: solving problems. Not only I could concentrate on the next coding questions, but I had fun solving them and at the end it felt like I had a great day. At Facebook we say, “What would you do if you weren’t afraid?” I think that after my first interview I truly stopped being afraid for the rest of that day, and it was great.

Elena:After my first interview I was really nervous and I didn’t know how I had done. In my second interview, I solved two problems (which I had never seen, I promise) super fast, so the interviewer said, “Well, we still have 25 more minutes, what do you want to know about Facebook?” That helped me a lot, and I could relax and I enjoy the rest of the interviews.

Elena:My recruiting experience overall can be described in one word, and that’s “fast.” I thought there were going to be more interviews, especially the non-coding ones. It was also surprising because the recruiters inform you of all the steps there are and they keep you updated with all the information they have from the beginning. You’re not just a random paper in a pile of resumes, you are a candidate–which was very refreshing.

Irina:Everything happened very fast. Once I was ready for the interviews, it didn’t take more than several weeks: the interviews were scheduled based on my availability, and I received the feedback one or two days afterwards. For me, this blog post was extremely helpful for understanding the recruitment process at Facebook, and what to expect at interviews.

Elena:I already knew that Facebook culture was great before I applied, but that was confirmed when I met the engineers.

Irina:I was impressed to find out that most engineers mention the people they work with as one of the top reasons why they enjoy working at Facebook. Another one is the fact that they feel like their work has significant impact on the company and all the people using Facebook.

Irina: Once I joined Facebook, I spent 7 weeks in Bootcamp, working on tasks for several projects across web, the mobile apps, and internal tools. It’s a great opportunity to meet people across the company, get an overview of what we’re building at Facebook and find out what you’d love to work on, since you’re able to choose your team and projects. In my case it was internal tools. If you’d like to know more about the Bootcamp program, have a look at this video.

Elena:Before joining Facebook I worked as an Android developer but during Bootcamp, I coincidentally also worked on some product and tools tasks and liked them a lot, so I decided to join the internal tools team. Now I work on the tasks tool, and I was really glad to be able to try a project so different from my previous area of expertise. While we both joined the tools team, engineers in London also work in other areas, such as Graph Search, Mobile, and Open Graph.

Irina: If you’re not confident about whether you’re prepared or not, the best way to find out is to go through some interviews with other companies before applying for the job you’re most interested in, and ask for feedback after each one. You’ll have a better idea of your strengths and areas to improve, and you’ll become familiar with what happens during an interview.

Elena: The best you can do when you apply for the job is to feel confident about yourself. This will help you feel less nervous and do better in the interviews.

We know getting ready for an interview can be stressful, but we hope that with our explanations of the process and our learnings, you feel prepared and excited to start interviewing.

To learn about opportunities on the engineering team in London, visit facebook.com/careers.