“My feed is cluttered.” That’s a piece of feedback the News Feed team has heard countless times. An obvious interpretation could be that people think the design of Feed is too busy and want it to be simplified, but stopping at literal interpretations is one of the easiest ways to end up with a product that fails to benefit the people whom it’s built for.

As the News Feed team prepared for this redesign, creating something that looked great and actually benefited people was the top priority. That’s where I came in.

As a user experience researcher, my job is to uncover the true and often unspoken needs of people using Facebook. Borrowing methods from psychology and anthropology, I get past the surface of statements made about News Feed. One basic method, the open-ended interview, is what I chose to unpack the meaning of “clutter.” I asked research participants to describe what action they’d take in order to “de-clutter” their feeds if they could. The responses had little to do with News Feed’s visual appearance. Some said they’d “de-clutter” by removing page posts from their feeds. Others said they’d clear out stories about friends’ activities on the site, such as listening to songs and playing games. Many people mentioned wanting to get rid of stories about friends liking or commenting on others’ posts. “Clutter,” it turned out, referred to stories people don’t want to see in their feeds. 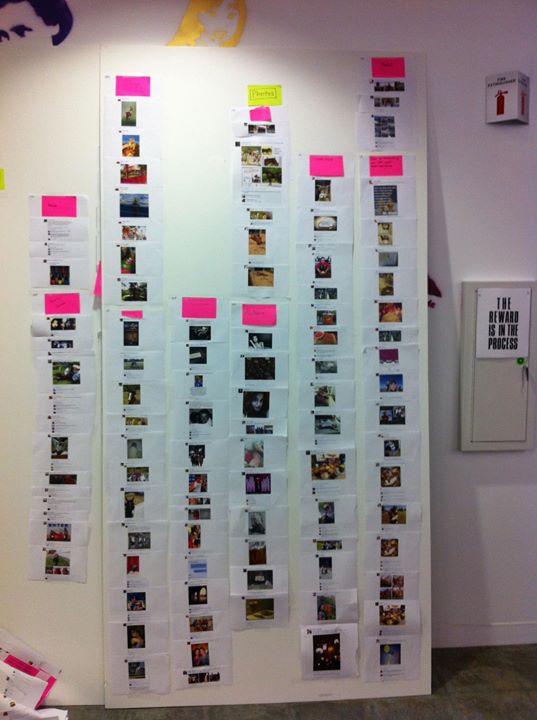 A look at our data showed that the stories people click, like, and comment on the most are actually the very stories they said they wanted the ability to filter out: page posts, stories about songs and games, and stories friends liked or commented on. Since people were clearly interested in these stories, our task became figuring out how to display them separately from News Feed, in a way that people would want to see them.

We came up with the idea of multiple feeds, each with its own focus on a particular topic, type of content, or type of friend. It was a good start, but crucial questions remained: which feeds to offer, and which stories to put into them? Those answers required a second round of research.

I didn’t simply ask people which feeds they’d like to see, because as any user experience researcher knows, it’s very difficult for people to predict what they’ll end up liking. Instead I needed to come up with a way for people to show me — not tell me — which feeds would be valuable. I chose a method known as a “card sort,” which researchers usually turn to in order to understand how people mentally relate different topics to each other. But as we often do in research at Facebook, I adapted the method for a different purpose: to get people to reverse-engineer the feeds they’d find interesting. I gave each participant a stack of recent stories from their feed, printed out on paper, and asked them to pick out the ones that interested them and discard the rest. Next, I asked them to sort the remaining, interesting stories by putting them into piles separated by what they liked about each.

An analysis of participants’ piles and the stories they’d put into them yielded clear themes. Unsurprisingly, many people made categories of stories they liked because they contained photos, and a majority of participants created a category of posts by people they felt close to. Something we weren’t expecting, though, was the large number of participants who created categories of stories they liked because they related to their interests; these were mainly full of posts from pages and people they were following. Another surprise was that many people created a category specially for stories that came from friends they didn’t necessarily feel close to but were glad to see occasional updates from on Facebook. 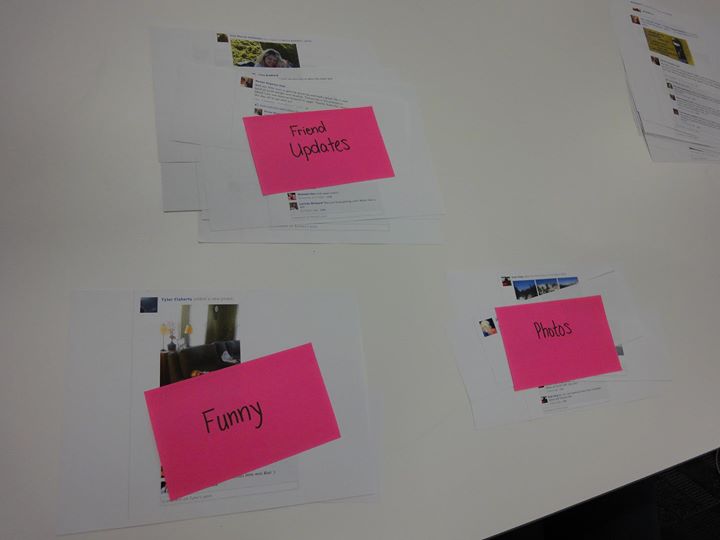 These themes from my sorting study went directly into the team’s decisions about which feeds to make available to people. A “Photos” feed had been a no-brainer from the start, and the idea of a “Close Friends” feed had been in the mix and got more traction based on the findings. But the creation of a “Following” feed was spurred by people’s desire for stories related to their interests. The “All Friends” feed was also born out of my research, which showed people were interested in serendipitous discovery of stories from their full friend lists.

Research participants often tell me they’re surprised to learn it’s the job of someone at Facebook to speak directly with people, instead of only analyzing metrics, and one of the most rewarding parts of my job is observing the satisfaction participants get from my listening to them. I couldn’t talk to every one of the billion people who use Facebook, but I hope the improvements we made based on the large number I did speak with will give many more people the feeling they’ve been listened to.