We’re always looking for ways to make our computing infrastructure more efficient, and in 2010 we deployed HipHop for PHP to help support the growing number of Facebook users. While HipHop has helped us make significant gains in the performance of our code, its reliance on static compilation makes optimizing our code time consuming. We were also compelled to develop a separate HipHop interpreter (hphpi) that requires a lot of effort to maintain. So, early last year, we put together a small team to experiment with dynamic translation of PHP code into native machine code. What resulted is a new PHP execution engine based on the HipHop language runtime that we call the HipHop Virtual Machine (hhvm). We’re excited to report that Facebook is now using hhvm as a faster replacement for hphpi, with plans to eventually use hhvm for all PHP execution.

Facebook uses hphpi (and now hhvm) for day-to-day software development, but uses the HipHop compiler (hphpc) to create optimized binaries that serve the Facebook website. hphpc is in essence a traditional static compiler that converts PHP→AST→C++→x64. We have long been keenly aware of the limitations to static analysis imposed by such a dynamic language as PHP, not to mention the risks inherent in developing software with hphpi and deploying with hphpc. Our experiences with hphpc led us to start experimenting with dynamic translation to native machine code, also known as just-in-time (JIT) compilation. A dynamic translator can observe data types as the program executes, and generate type-specialized machine code. Unfortunately we didn’t have a clean model of PHP language semantics built into HipHop, as hphpc and hphpi are based directly on two distinct abstract syntax tree (AST) implementations, rather than sharing a unified intermediate representation. Therefore we developed a high-level stack-based virtual machine specifically tailored to PHP that executes HipHop bytecode (HHBC). hhvm uses hphpc’s PHP→AST implementation and extends the pipeline to PHP→AST→HHBC. We iteratively codeveloped both an interpreter and a dynamic HHBC→x64 translator that seamlessly interoperate, with the primary goal of cleanly supporting translation.

Throughout the hhvm project we have tended toward simple solutions. This is nowhere more evident than in the core premise of the dynamic translator itself. Most existing systems use method-at-a-time JIT compilation (e.g., Java and C#), though trace-based translation has also been explored in recent systems (e.g., Tamarin and TraceMonkey). We decided to try a very simple form of tracing that limits each trace to a single basic block with known input types. This “tracelet” approach simplifies the trace cache management problem, because complex application control flow cannot create a combinatorial explosion of traces. Each tracelet has a simple three-part structure:

The type guards prevent execution for incompatible input types, and the remainder of the tracelet does the real work. Each tracelet has great freedom, the only requirement being that it restore the virtual machine to a consistent state any time execution escapes the tracelet and its helpers. The obvious disadvantage is that tracelet guards may repeat unnecessary work. Thus far we have not found this to be a problem, but we do have some solutions in mind should a need arise.

For those who are interested in understanding HHBC in detail, the bytecode specification is available in the HipHop source tree. However, detailed knowledge should not be necessary for understanding the following example: 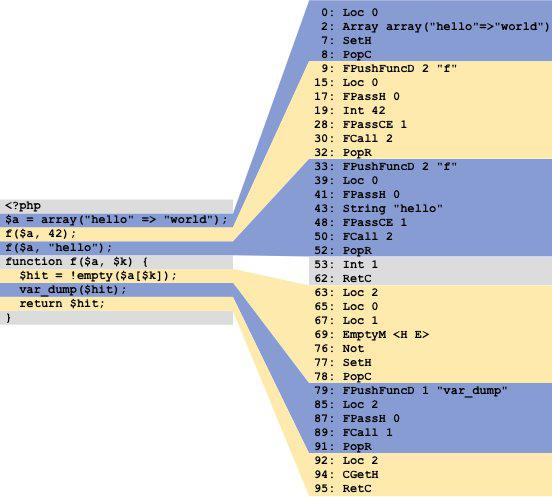 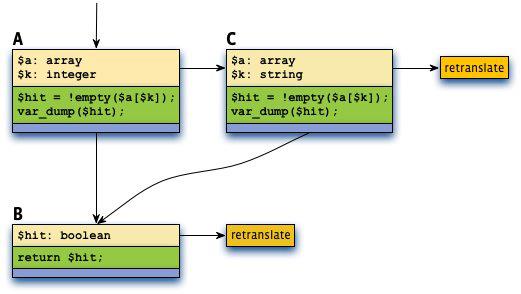 How well does hhvm work? As compared to hphpi, the hhvm bytecode interpreter is approximately 1.6X faster for a set of real-world Facebook-specific benchmarks. Right now there is a stability gap between the hhvm interpreter and translator, which precludes us reporting translator performance for the same set of benchmarks. However, we can infer from a set of benchmarks based on the Language Shootout that translator performance is closer to hphpc-compiled program performance than to interpreter performance, as indicated by the geometric mean of the benchmarks (rightmost column in the following figure). The interpreters are all roughly 0.2X as fast as hphpc, and the translator is approximately 0.6X as fast. For perspective on why this matters, consider that many Facebook engineers spend their days developing PHP code in an endless edit-reload-debug cycle. The difference between 8-second and 5-second reloads due to switching from hphpi to the hhvm interpreter makes a big difference to productivity, and this improvement will be even more dramatic once we enable the translator. 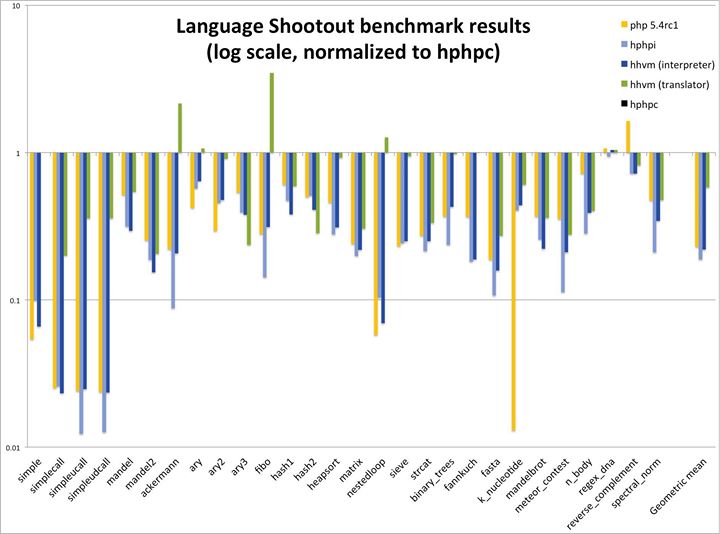 We expect hhvm to rapidly close the performance gap with hphpc-compiled binaries over the coming months as the dynamic translator stabilizes and matures. In fact, we predict that hhvm will eventually outperform statically compiled binaries in Facebook’s production environment, in part because we are already sharing enough infrastructure with the static compiler that we will soon be able to leverage static analysis results during tracelet creation.

Many challenges remain, as well as some uncertainty regarding the translator’s behavior when running the entirety of Facebook’s PHP codebase. In the near term we need to stabilize the translator and create an on-disk bytecode format (to reduce startup time and to store global static analysis results). Then we will need to optimize/tune both the translator and the interpreter as we observe how the system behaves under production workloads. Here are just a couple of the interesting problems we will soon face:

The first 90% of the hhvm project is done; now we’re on to the second 90% as we make it really shine. The hhvm code is deeply integrated with the HipHop source code, and we will continue to share HipHop via the public GitHub site for HipHop, just as we have since HipHop’s initial release in early 2010. We hope that the PHP community will find hhvm useful as it matures and engage with us to broaden its usefulness through technical discussions, bug reports, and code contributions. We actively monitor the GitHub site and mailing list.

Jason Evans is a software engineer on the HipHop team at Facebook, one of nearly 20 people who have contributed to the hhvm project so far.