Connectivity is at the heart of Facebook’s work to bring the world closer together. Together with our partners, we’re committed to working on a number of initiatives to build and leverage infrastructure, new technologies, tools, and programs to bring more people online.

One of the ways we’re working to do this is through the development of next-generation connectivity technologies like Aquila, a high-altitude platform station (HAPS) connectivity system. Though we recently decided to shift our focus away from designing and building our own aircraft, we’re continuing to work with the aerospace industry on technology to make HAPS connectivity work and to advocate for improvements to spectrum and aviation policy.

As part of our continued investment, we recently open-sourced our solar-powered aircraft design methods, named Facebook High Altitude Long Endurance (FBHALE), after presenting two papers on the multidisciplinary optimization (MDO) based technology at the American Institute of Aeronautics and Astronautics (AIAA) Aviation Conference. By open-sourcing this design framework, we can help the rest of the HAPS community optimize during the design process as well.

The need for MDO

Recent progress in battery technology, solar-cell efficiency, and composite materials has dramatically increased the feasibility of solar-powered perpetual flight. However, even with these improvements, ensuring that a solar-powered aircraft can use as little power as possible to perform in even the harshest conditions — such as the winter solstice — still demands the highest aircraft performance. This means maximizing aerodynamic performance (lift-to-drag ratio) and minimizing structural mass to support maximizing energy storage capability. However, increasing aerodynamic performance is detrimental to overall structural weight, and vice versa. Therefore, careful trade-offs need to be considered to ensure optimal system performance.

We developed an MDO design framework to address these challenges early and to avoid redesigns. The design process is inherently an optimization opportunity and, since we are looking for the best aircraft design that can achieve our target requirements, we are utilizing an optimization routine to both maximize objectives and satisfy constraints.

This framework incorporates low-speed aerodynamics, composite-structure design principles, and all the simplest physical models that still rely on relevant physics.

Because of the numerous variables involved in the design process of high-altitude aircraft, this work can be challenging. In the figure below, we have illustrated our strategy to effectively handle the number of dimensions in this phase. 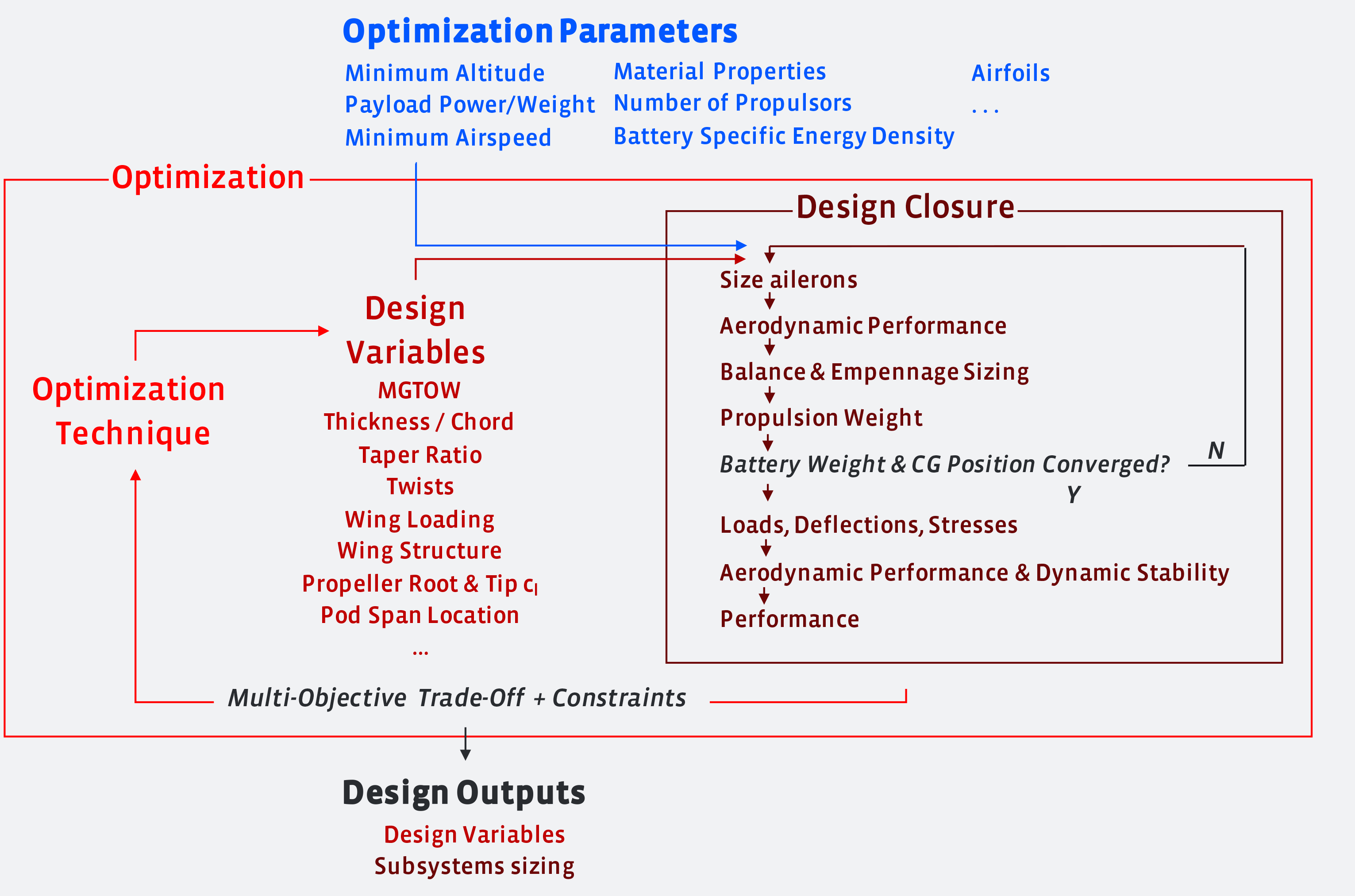 The chosen optimizer adjusts design variables to maximize the mentioned objectives while satisfying constraints. This set of variables is the minimum set that captures the main performance driver in each subsystem as well as the key interdisciplinary couplings.

As part of our MDO framework, we outlined a few modeling techniques, including:

At each section along the wing, the aerodynamic performance is captured by computing the lift and drag. These quantities are dependent on the local airfoil choice and its thickness. A thicker airfoil will have a degraded aerodynamic performance but will allow for greater stiffness. The thickness distribution is therefore set by the optimizer, and a corresponding airfoil is picked from the airfoil family illustrated below. Since lightweight wings are highly flexible, they deflect under aerodynamic load, which modifies their shapes and the aerodynamic forces they create. Our tool captures this important coupling.

The aircraft structure shown below follows a “composite box spar” concept, with solar cells integrated into the upper surface of the wing. Carbon fiber composite materials are employed for structural efficiency, and the optimizer can vary key parameters such as the number of carbon fiber plies used to adjust the stiffness of the structure. Furthermore, we also verified that the structure would not fail during strenuous flight conditions. 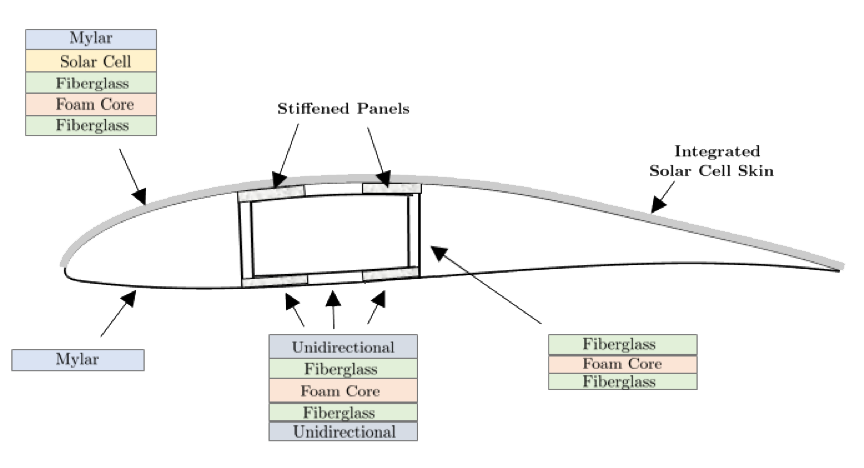 The last step when evaluating a potential aircraft design is to examine whether the aircraft can carry enough batteries to hold sufficient energy to fly through the long nights around the winter solstice. We also need to examine whether there is a sufficient number of solar cells to capture power during the day to fully charge the batteries. A typical mission would take place when there is enough sun power to sustain flight and would include:

When simulating the winter solstice mission, we computed the amount of power captured and stored by the aircraft, as well as the amount consumed during the flight. This method outputs the battery state of charge versus time, and ensures that the battery’s charge never drops below a certain threshold.

This design framework is particularly useful in the early design stages of aircraft concepts because it identifies the optimal size for an aircraft capable of flying a given latitude above or below the equator. Additionally, key risks are identified and addressed early to avoid redesigns. Here, we compare two configurations to illustrate how our MDO framework can predict optimal aircraft weight and performance. This information will feed into the configuration selection. Though in our publications we show that we can handle flying wings, here we investigate a single boom versus a dual boom concept:

While the dual boom configuration has added mass and drag from the extra empennage, these extra tails could potentially reduce the tendency of the wing to start flapping and help to mitigate aeroelastic instabilities. The output of the optimization is shown below in the form of Pareto frontiers. At each latitude, we have illustrated the minimum aircraft weight for each configuration: 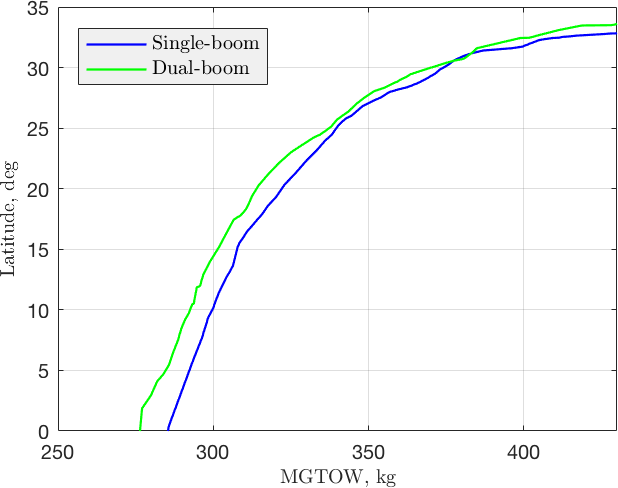 As expected, aircraft weight goes up with latitude for both configurations since the night gets longer, which therefore requires larger batteries.

HAPS connectivity remains one of the important building blocks we are investing in to advance global connectivity, and we are excited to continue working with the aerospace industry to optimize these subsystems and create the highest-performing aircraft.

Since this framework is now open sourced, aircraft designers can improve upon it and even use it for different applications. We see potential future developments in areas such as the control system development and integration, and more advanced power systems and configurations. One day, this framework may even help civil aviation authorities tackle the challenges of airworthiness certification for these new types of solar-powered aircraft. 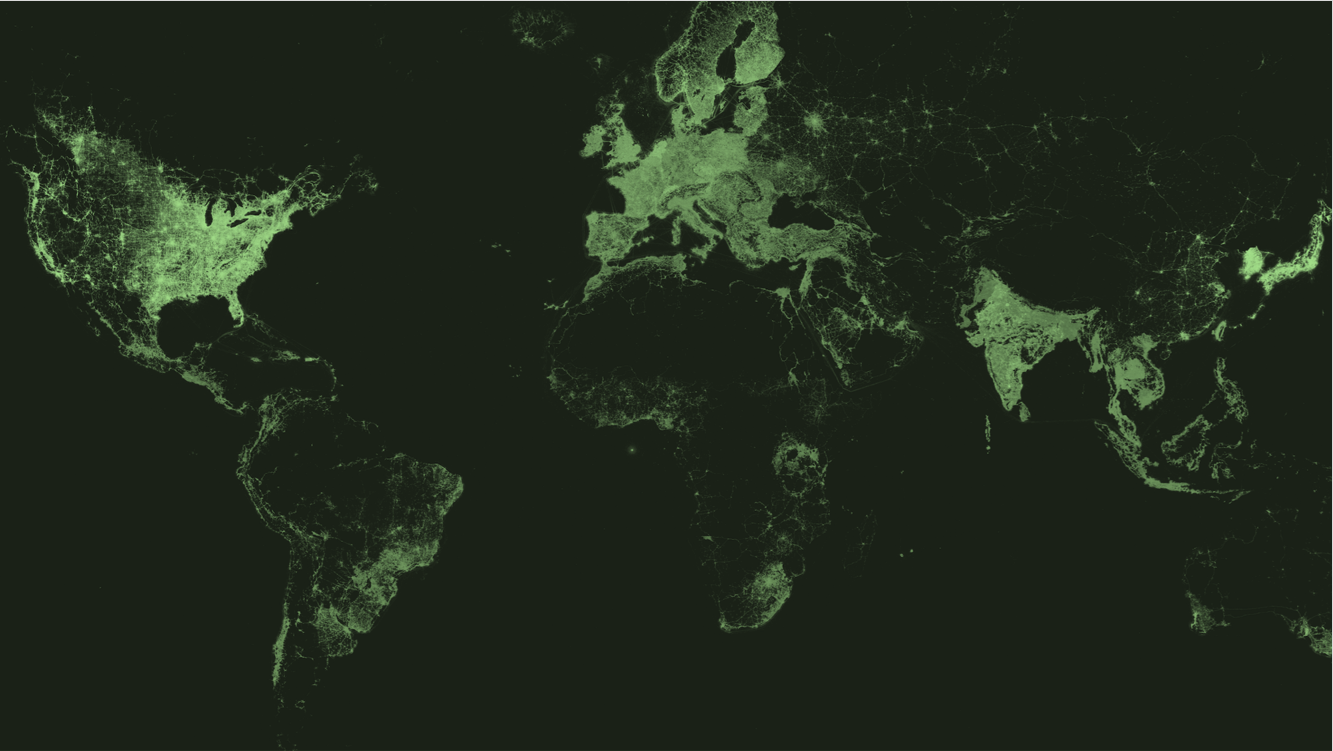 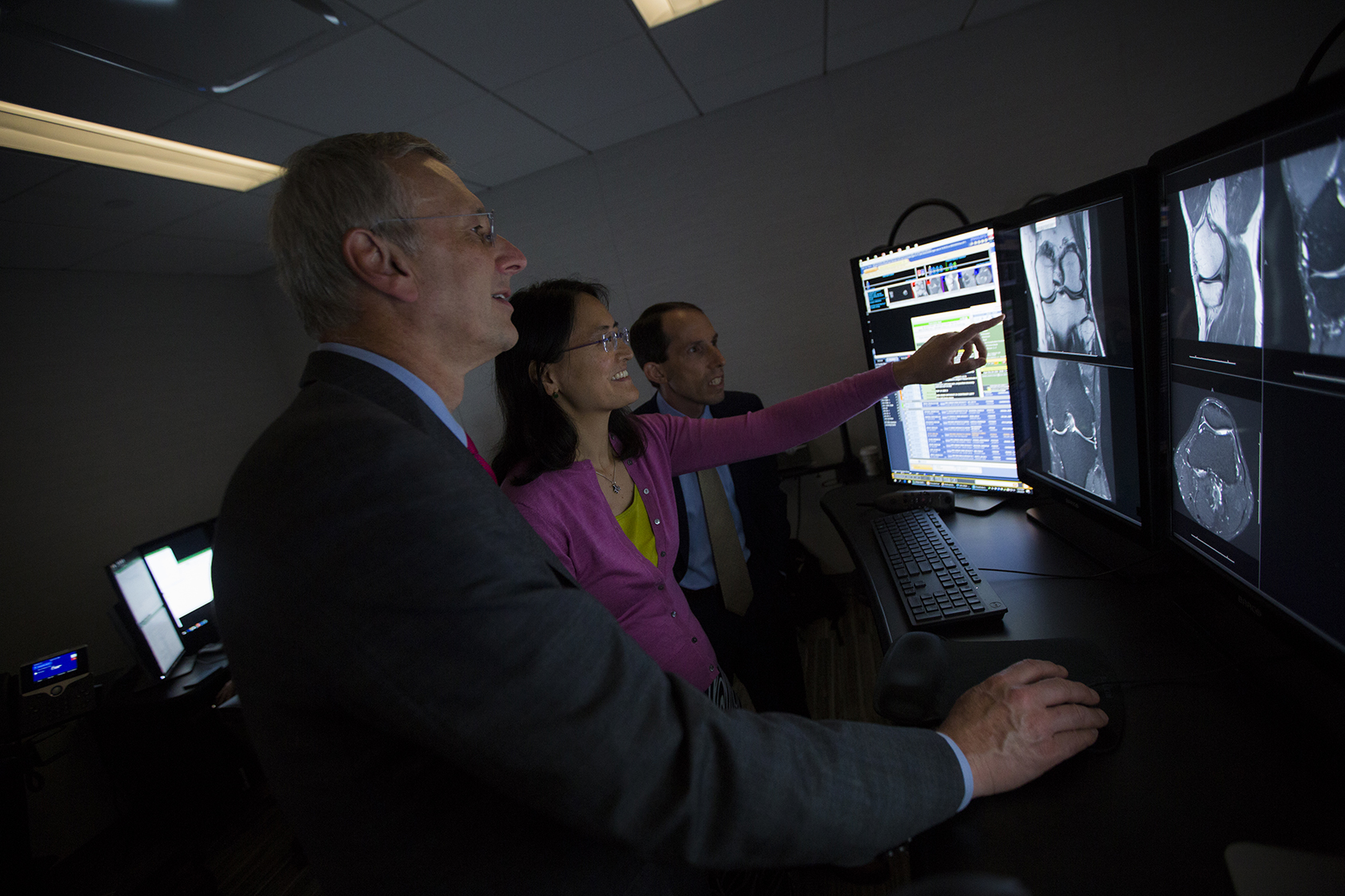 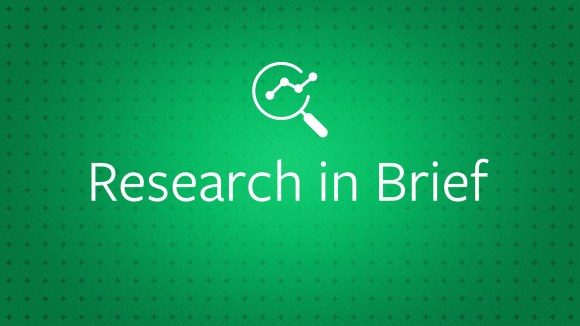 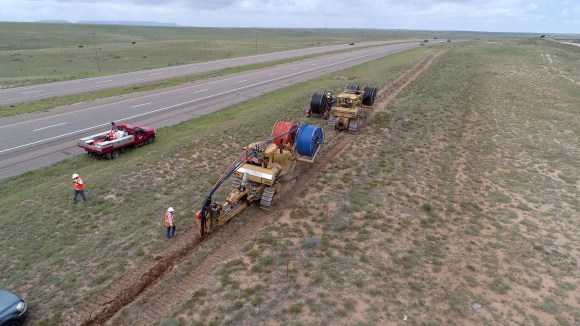 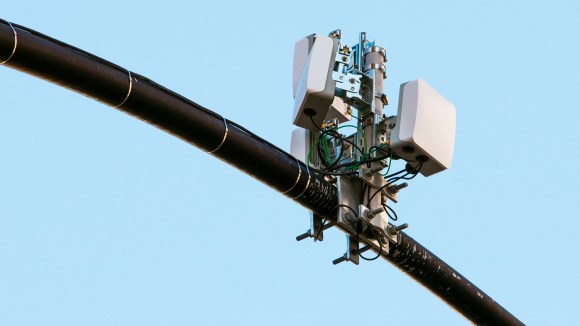 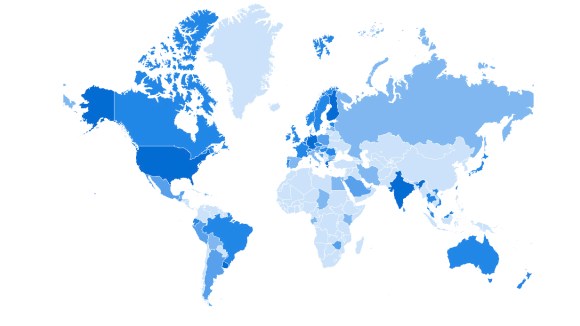 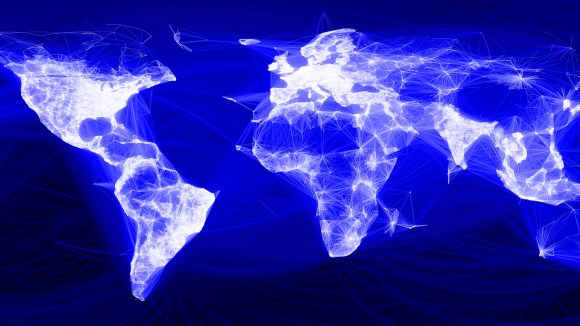