There are thousands of distributed services running on millions of servers in Meta’s data centers. Part of ensuring the reliability of those services means making them resilient to power loss events as our data center fleet grows. To help increase resiliency, we built the Power Loss Siren (PLS) — a rack level, low latency, distributed power loss detection and alert system.

Power loss events can affect thousands of servers simultaneously, potentially causing degradation or downtime for many services used by Meta’s family of apps. PLS helps mitigate the impact of these events. It leverages existing in-rack batteries to notify services about impending power loss without requiring additional hardware, so that engineers or the services themselves can take action. PLS also features a simple API for services to implement mitigation handlers while servers run on battery power. With PLS support, services can failover proactively, rather than reactively after servers go down.

PLS has also simplified our physical infrastructure management. We hope the lessons we’ve learned over our four years developing PLS can help others mitigate data center power loss events at scale as well.

In Meta’s data centers, we deliver power to server racks through a treelike hierarchy of power devices. This structure can support up to a predetermined amount of IT load (server power). Using hierarchical power distribution helps with better fault isolation, preventing faults from traveling upstream. If one or more of these power devices suffer an outage, all the underlying server racks lose power. The higher in the hierarchy the power loss occurs, the larger the number of servers affected. 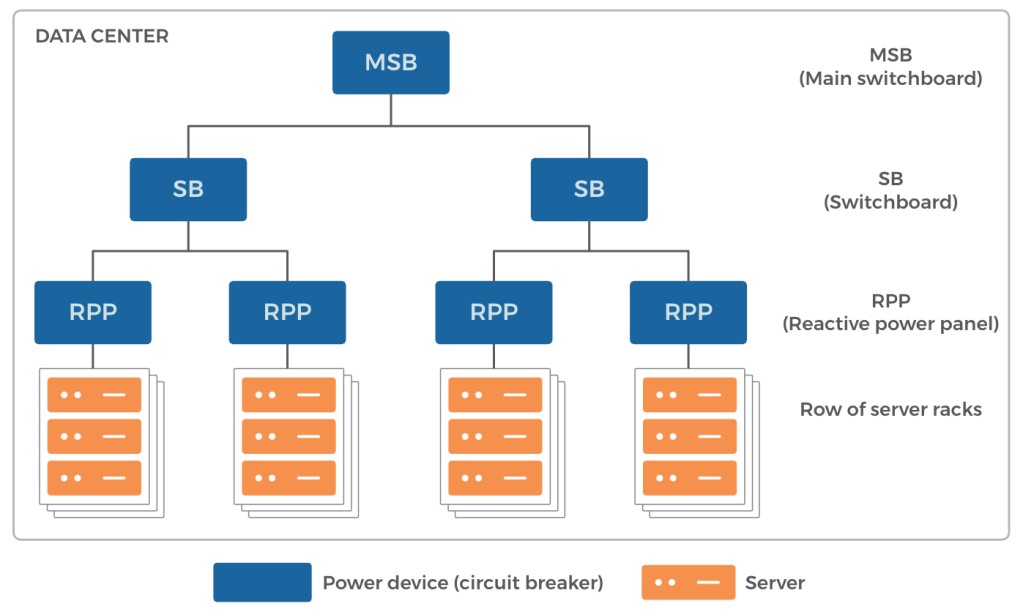 Power loss events can occur for various reasons, including: 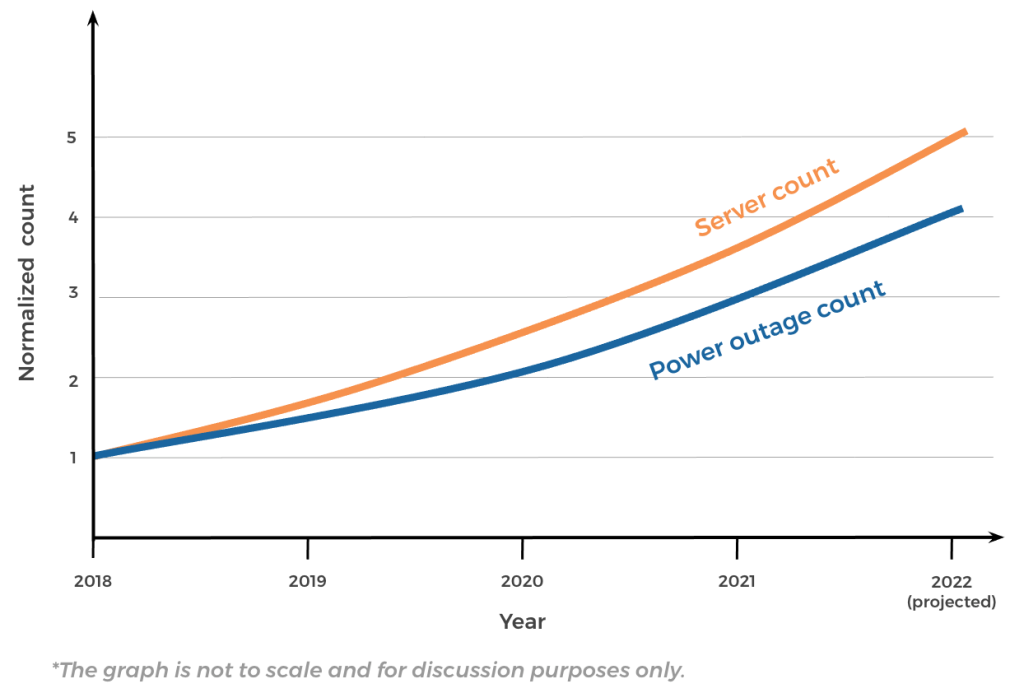 The PLS architecture and event flow

PLS Relay runs on all TOR switches, and PLS Handler runs on all servers. As such, both daemons need to be simple to maintain, resource efficient, and highly reliable in detecting power loss events. It’s also worth noting that all PLS detection software runs locally on the rack. Not having to depend on remote systems helps ensure high reliability and low latency in power loss detection and alerting. The service owners configure the mitigation handler, which varies depending on what services happen to be running on the server when a power loss occurs.

Here’s how the PLS mitigation flow works during a power loss event: 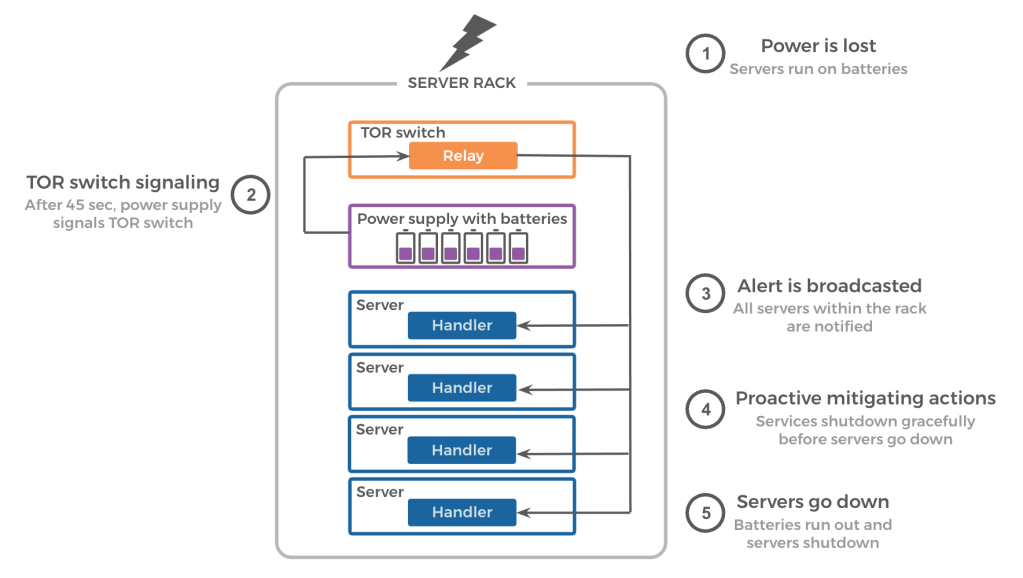 Here’s a look at how PLS helps mitigate the impact of power loss events on two of Meta’s services:

Meta’s user data storage (posts, likes, comments, etc.) is deployed as a geo-distributed MySQL system. Data is sharded, with each shard having a primary instance and multiple secondary instances. This forms a replica set, distributed globally across different data centers. A given server hosts multiple instances, which may be a mix of primary and secondary instances of different shards.

MySQL directs read actions (browsing posts, comments, etc.) to either a primary or a secondary instance. MySQL directs write actions (posts, likes, comments, etc.) to the primary instance. The primary asynchronously streams write actions to the shard’s secondaries. The primary instance also streams transaction logs to the log backup units (LBU). After completing the write to its own storage and receiving a write acknowledgement from at least one LBU, the primary instance sends a write success signal back to the client. MySQL allocates LBUs under a different root power device (MSB) to avoid data loss during unplanned primary outages. 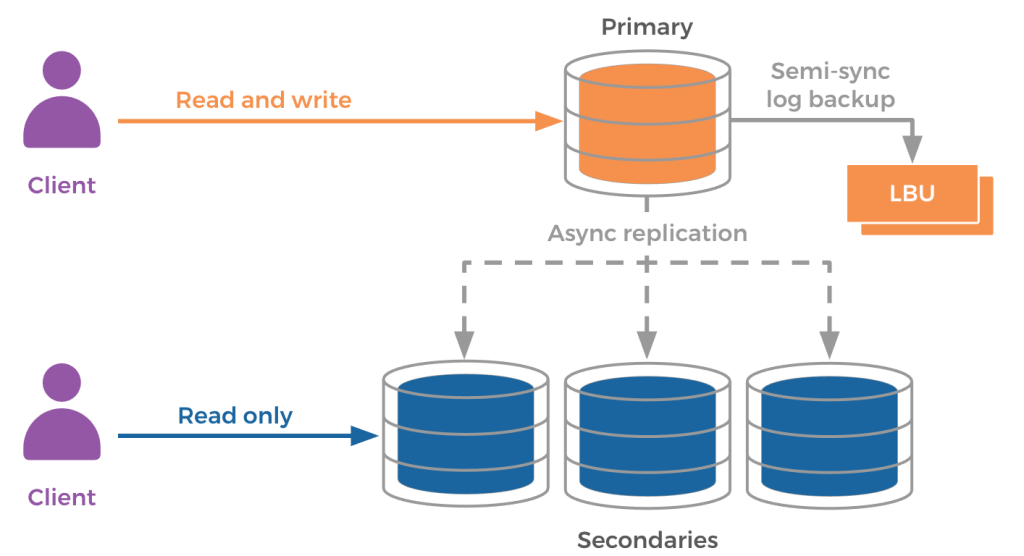 When an unplanned server outage occurs, all the primaries hosted on it become unavailable for writes. Without the primary, write actions fail. Recovery is automatic — the secondaries initiate a promotion sequence when they notice they’re not able to transmit heartbeats to the primary. For each unavailable primary, MySQL picks a remote secondary (in a different data center region) as the primary candidate. The candidate catches up to the latest update in the LBUs. Then, the candidate becomes the new primary. MySQL directs all new write requests to the newly elected primary. In total, failure detection by the secondaries, followed by promotion, takes on the order of tens of seconds.

A large-scale, unplanned outage that affects servers hosting primary shards can impact features like posting, liking, and commenting. MySQL uses PLS to proactively promote a remote secondary for every primary that is experiencing a power loss. Since PLS offers a high-quality signal about an impending power loss event, we don’t need to make multiple attempts at connecting to a dead server before deciding it’s unhealthy. As we prepare the remote secondary to take on the role of the primary, the previous primary still processes write requests since it’s running on battery power. There’s a small amount of downtime to switch roles from the old to the new primary, but it’s effectively invisible to the end user.

The web tiers at Meta consist of servers that serve all page loads on all platforms (Android, iOS, and web browser) for Meta and internal web applications. They have a presence in all Meta data centers. Web servers are stateless PHP servers that serve web content. A reverse proxy fronts the web tier, whose responsibilities include security (e.g., TLS handshake), load balancing, caching, compression, etc.

When an unplanned outage affects a web server, we lose all requests, whether queued or being processed. These manifest as timeouts — leading to longer latencies for page loads because of retries or even outright application errors.

With PLS alerts, we stop sending new requests to the affected servers. To achieve this, the server begins a graceful shutdown. It also reports a bad health metric to the load balancer to avoid receiving any new requests. As a web server shuts down in response to PLS, it continues servicing requests either queued or being processed until the battery backup power runs out.

Dual-powered rows protected services against the most common cause of power loss events — row power device failures. However, they didn’t solve other practical problems and forced certain capacity requirements. Specifically, they didn’t address: 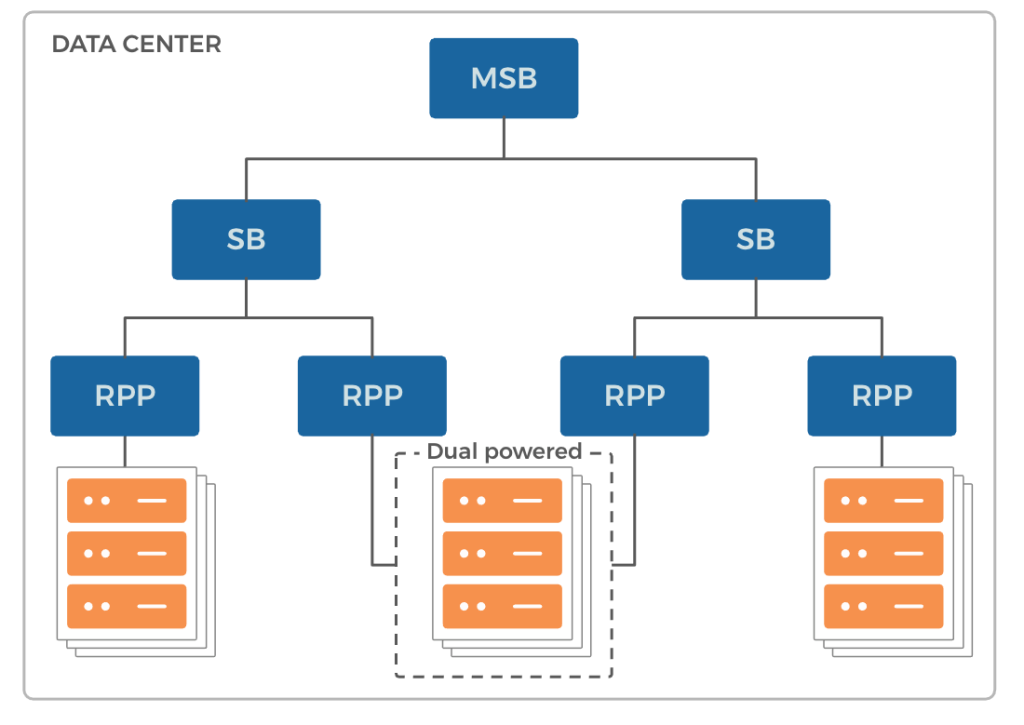 PLS support automatically handles row- and MSB-level power loss events. As a result, we no longer need to build and maintain dual-powered rows. Also, without the constraints to place storage racks hosting MySQL on dual-corded rows, we can uniformly distribute them across the data center. This improves fault tolerance and reduces additional buffer requirements.

As our data center fleet grows, so will our need to mitigate the impact of power loss events. With these challenges in mind, we are actively exploring more applications for PLS and onboarding new services to it. Some of our ongoing efforts include: