High-quality internet connectivity gives people a voice, creates opportunities, and strengthens local and global economies. The need for widespread reliable internet connectivity and infrastructure is more apparent now than ever, as heavier reliance on remote work and online communication during the COVID-19 pandemic drives a dramatic surge in global internet usage. And yet, according to the 2020 Inclusive Internet Index, nearly half the world remains unconnected.

Submarine fiber optic cables, or subsea cables, are among the most important components that enable greater connectivity, but they are not well known. They are important for global network infrastructure, connecting countries, carrying communications, and enabling commerce and education. The importance of internet connectivity to economic growth is well established, but rigorous studies quantifying the impacts are not available for many countries.

Our recently announced 2Africa cable, which we are developing with regional and global partners, is one of the largest subsea cable projects in the world. It will interconnect 23 countries in Africa, the Middle East, and Europe, delivering more than the total combined capacity of all subsea cables serving Africa today. At 37,000 kilometers long, 2Africa will be nearly equal to the circumference of the Earth and will link the continent from east to west for the first time. 2Africa will greatly enhance internet capacity and connectivity at a time in which broadband traffic is growing significantly worldwide. Growth in the demand for broadband technology are driven by trends in the global economy, as high-quality, reliable broadband is increasingly used by many industries to produce and sell goods and services.

RTI International, an independent nonprofit research institute, estimates that the impact of 2Africa would likely be an increase of 0.42 to 0.58 percent in African GDP within the first two to three years of going live in 2023–2024. This estimate is based on analysis leveraging empirical evidence, market conditions and trends, and discussions with experts about the effects of broadband on the African economy. This impact is equivalent to 26.4 to 36.9 billion USD at purchasing power parity (PPP), a metric that accounts for differences in standards of living between countries. From analyzing previous subsea cables, RTI expects to see increases in employment (including high-skilled jobs), greater efficiency and productivity for businesses, and improved access to education, healthcare, and commerce. There will likely be additional impact beyond the two- to three-year period, however, it is too soon to quantify what that impact may be. RTI’s full report about 2Africa is available here. (This research was conducted prior to the COVID-19 pandemic.)

Understanding the impact of subsea cables is important for designing the policies and prioritizing the infrastructure investments that will be most effective for growth. Based on the estimates from the most current studies, subsea cables and broadband infrastructure investments are among the most effective development policies for economic growth in Africa. The promise of subsea cables as drivers of economic growth in Africa warrants excitement about the potential economic impact of 2Africa.

The six countries — Nigeria, Democratic Republic of Congo, Kenya, South Africa, Mozambique, and Tanzania — show varying degrees of positive results. Four of the six countries studied experienced notable increases in employment, with all other variables controlled for. The results show us how subsea cables and greater connectivity can drive economic growth. 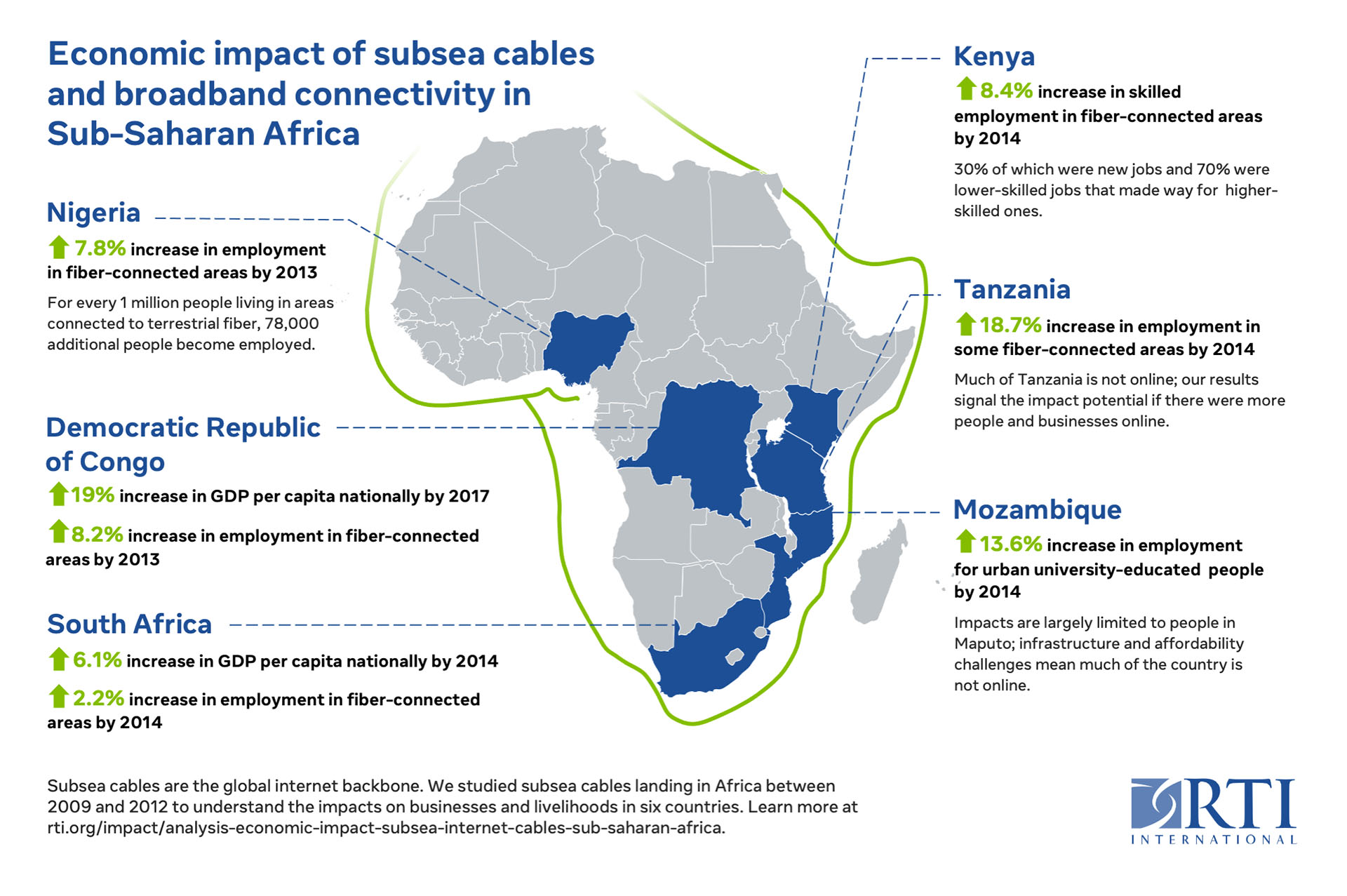 RTI used advanced statistical techniques paired with local insights to document the impact that subsea cables and improved connectivity have had on economic development. The team looked specifically at subsea cable landings over the past 6 to 10 years in each country, controlling for technology trends, population characteristics, and other important factors. These findings underscore the importance of accelerating the growth in connectivity in sub-Saharan African countries.

2Africa is a continuation of our ongoing efforts to expand global network infrastructure. 2Africa is a major investment at an important time for the continent’s economic recovery and will play a large role in supporting tremendous internet expansion to underpin Africa’s growing digital economy. For regions such as sub-Saharan Africa, where more than half of all global population growth between now and 2050 will occur, we look to remove barriers to access. We will continue to collaborate with partners all over the world to help expand and improve global connectivity, close the digital divide, and strengthen economies. We will continue to study and release information about the role of subsea cables in Africa and around the world as we invest in this critical infrastructure.