Facebook often uses analytics for data-driven decision making. Over the past few years, user and product growth has pushed our analytics engines to operate on data sets in the tens of terabytes for a single query. Some of our batch analytics is executed through the venerable Hive platform (contributed to Apache Hive by Facebook in 2009) and Corona, our custom MapReduce implementation. Facebook has also continued to grow its Presto footprint for ANSI-SQL queries against several internal data stores, including Hive. We support other types of analytics such as graph processing and machine learning (Apache Giraph) and streaming (e.g., Puma, Swift, and Stylus).

While the sum of Facebook’s offerings covers a broad spectrum of the analytics space, we continually interact with the open source community in order to share our experiences and also learn from others. Apache Spark was started by Matei Zaharia at UC-Berkeley’s AMPLab in 2009 and was later contributed to Apache in 2013. It is currently one of the fastest-growing data processing platforms, due to its ability to support streaming, batch, imperative (RDD), declarative (SQL), graph, and machine learning use cases all within the same API and underlying compute engine. Spark can efficiently leverage larger amounts of memory, optimize code across entire pipelines, and reuse JVMs across tasks for better performance. Recently, we felt Spark had matured to the point where we could compare it with Hive for a number of batch-processing use cases. In the remainder of this article, we describe our experiences and lessons learned while scaling Spark to replace one of our Hive workload

Real-time entity ranking is used in a variety of ways at Facebook. For some of these online serving platforms raw feature values are generated offline with Hive and data loaded into its real-time affinity query system. The old Hive-based infrastructure built years ago was computationally resource intensive and challenging to maintain because the pipeline was sharded into hundreds of smaller Hive jobs. In order to enable fresher feature data and improve manageability, we took one of the existing pipelines and tried to migrate it to Spark.

The Hive-based pipeline was composed of three logical stages where each stage corresponded to hundreds of smaller Hive jobs sharded by entity_id, since running large Hive jobs for each stage was less reliable and limited by the maximum number of tasks per job. 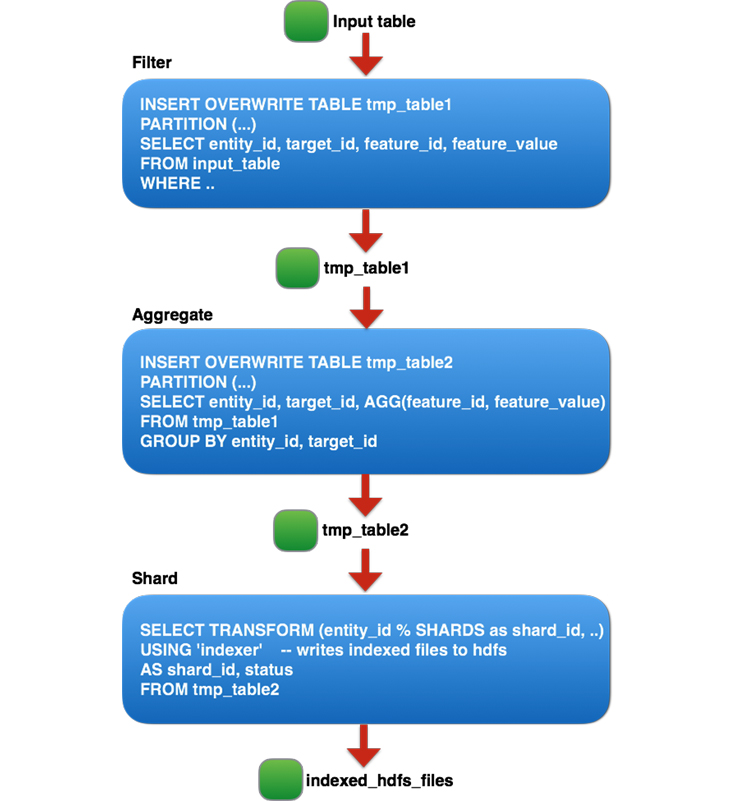 The three logical steps can be summarized as follows:

The Hive-based pipeline building the index took roughly three days to complete. It was also challenging to manage, because the pipeline contained hundreds of sharded jobs that made monitoring difficult. There was no easy way to gauge the overall progress of the pipeline or calculate an ETA. When considering the aforementioned limitations of the existing Hive pipeline, we decided to attempt to build a faster and more manageable pipeline with Spark.

Debugging at full scale can be slow, challenging, and resource intensive. We started off by converting the most resource intensive part of the Hive-based pipeline: stage two. We started with a sample of 50 GB of compressed input, then gradually scaled up to 300 GB, 1 TB, and then 20 TB. At each size increment, we resolved performance and stability issues, but experimenting with 20 TB is where we found our largest opportunity for improvement.

While running on 20 TB of input, we discovered that we were generating too many output files (each sized around 100 MB) due to the large number of tasks. Three out of 10 hours of job runtime were spent moving files from the staging directory to the final directory in HDFS. Initially, we considered two options: Either improve batch renaming in HDFS to support our use case, or configure Spark to generate fewer output files (difficult due to the large number of tasks — 70,000 — in this stage). We stepped back from the problem and considered a third alternative. Since the tmp_table2 table we generate in step two of the pipeline is temporary and used only to store the pipeline’s intermediate output, we were essentially compressing, serializing, and replicating three copies for a single read workload with terabytes of data. Instead, we went a step further: Remove the two temporary tables and combine all three Hive stages into a single Spark job that reads 60 TB of compressed data and performs a 90 TB shuffle and sort. The final Spark job is as follows:

How did we scale Spark for this job?

Of course, running a single Spark job for such a large pipeline didn’t work on the first try, or even on the 10th try. As far as we know, this is the largest real-world Spark job attempted in terms of shuffle data size (Databrick’s Petabyte sort was on synthetic data). It took numerous improvements and optimizations to the core Spark infrastructure and our application to get this job to run. The upside of this effort is that many of these improvements are applicable to other large-scale workloads for Spark, and we were able to contribute all our work back into the open source Apache Spark project — see the JIRAs for additional details. Below, we highlight the major improvements that enabled one of the entity ranking pipelines to be deployed into production.

In order to reliably execute long-running jobs, we want the system to be fault-tolerant and recover from failures (mainly due to machine reboots that can occur due to normal maintenance or software errors). Although Spark is designed to tolerate machine reboots, we found various bugs/issues that needed to be addressed before it was robust enough to handle common failures.

After implementing the reliability improvements above, we were able to reliably run the Spark job. At this point, we shifted our efforts on performance-related projects to get the most out of Spark. We used Spark’s metrics and several profilers to find some of the performance bottlenecks.

After all these reliability and performance improvements, we are pleased to report that we built and deployed a faster and more manageable pipeline for one of our entity ranking systems, and we provided the ability for other similar jobs to run in Spark.

We used the following performance metrics to compare the Spark pipeline against the Hive pipeline. Please note that these numbers aren’t a direct comparison of Spark to Hive at the query or job level, but rather a comparison of building an optimized pipeline with a flexible compute engine (e.g., Spark) instead of a compute engine that operates only at the query/job level (e.g., Hive). 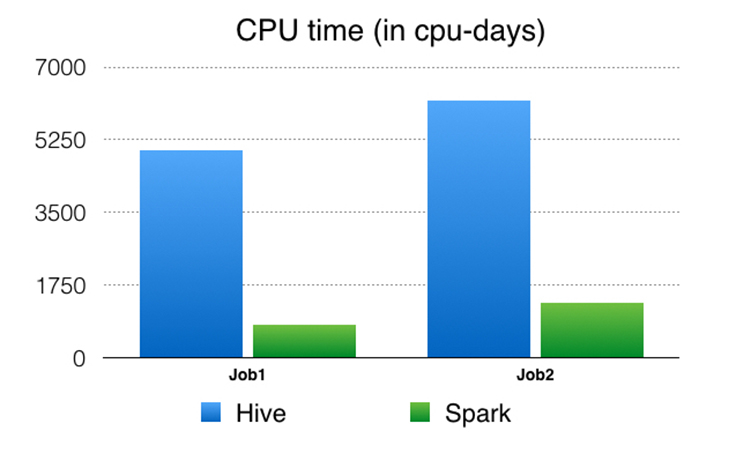 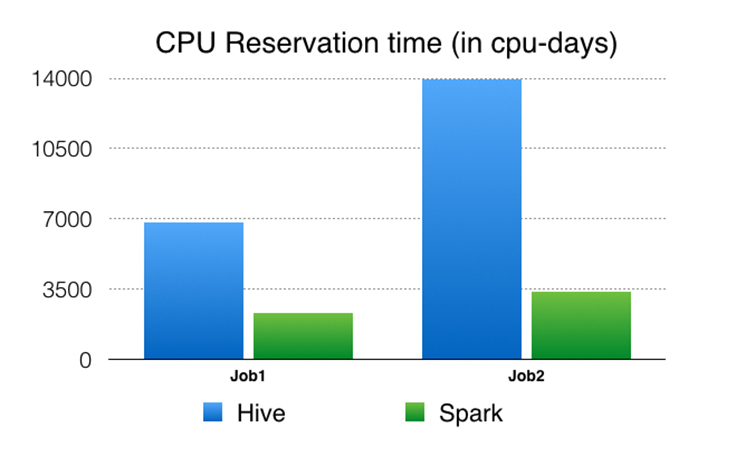 Facebook uses performant and scalable analytics to assist in product development. Apache Spark offers the unique ability to unify various analytics use cases into a single API and efficient compute engine. We challenged Spark to replace a pipeline that decomposed to hundreds of Hive jobs into a single Spark job. Through a series of performance and reliability improvements, we were able to scale Spark to handle one of our entity ranking data processing use cases in production. In this particular use case, we showed that Spark could reliably shuffle and sort 90 TB+ intermediate data and run 250,000 tasks in a single job. The Spark-based pipeline produced significant performance improvements (4.5-6x CPU, 3-4x resource reservation, and ~5x latency) compared with the old Hive-based pipeline, and it has been running in production for several months.

While this post details our most challenging use case for Spark, a growing number of customer teams have deployed Spark workloads into production. Performance, maintainability, and flexibility are the strengths that continue to drive more use cases to Spark. Facebook is excited to be a part of the Spark open source community and will work together to develop Spark toward its full potential.