For years, WhatsApp has protected the personal messages you send on WhatsApp Web with end-to-end encryption as they transit from sender to recipient. But security conscious users need to be confident that when WhatsApp Web receives these encrypted messages, it is protected as well. In contrast to a downloadable mobile app, a web app is usually served directly to users, without a third party reviewing and auditing the code. There are many factors that could weaken the security of a web browser that don’t exist in the mobile app space, such as browser extensions. Additionally, because the mobile app space was built after the web was created, the security guarantees offered on mobile can be stronger, particularly given that third-party app stores review and approve each app and software update. But today, that’s changing, as Code Verify is bringing even more security to WhatsApp Web.

Code Verify works in partnership with Cloudflare, a web infrastructure and security company, to provide independent, third-party, transparent verification of the code you’re being served on WhatsApp Web. We hope this gives at-risk users peace of mind.

No other end-to-end encrypted messaging service has this level of security for people’s communications on the web. In addition to deploying Code Verify for WhatsApp Web, it is also being offered as open source so that other services can use it as well. Below is an overview of how Code Verify works, how to use it, and the value of open-sourcing it.

We’ve given Cloudflare a cryptographic hash source of truth for WhatsApp Web’s JavaScript code. When someone uses Code Verify, the extension automatically compares the code that runs on WhatsApp Web against the version of the code verified by WhatsApp and published on Cloudflare. If there are any inconsistencies, Code Verify will notify the user.

While comparing hashes to detect files that have been tampered with is not new, Code Verify does so automatically, with the help of Cloudflare’s third-party verification, and at this scale for the first time. WhatsApp’s security protections, the Code Verify extension, and Cloudflare all work together to provide real-time code verification. Whenever the code for WhatsApp Web is updated, the cryptographic hash source of truth and extension will update automatically as well.

Cloudflare has provided a deeper dive on how this system works, including their role as a trusted third party, on their blog which can be found here.

How to use Code Verify

Once installed, Code Verify will run automatically when you go to WhatsApp Web and act as a real-time alert system for the code you’re being served on WhatsApp Web. Pinning the extension to your web browser’s toolbar will allow you to see its findings without any additional steps. You can think of Code Verify as a traffic light for your WhatsApp Web code: 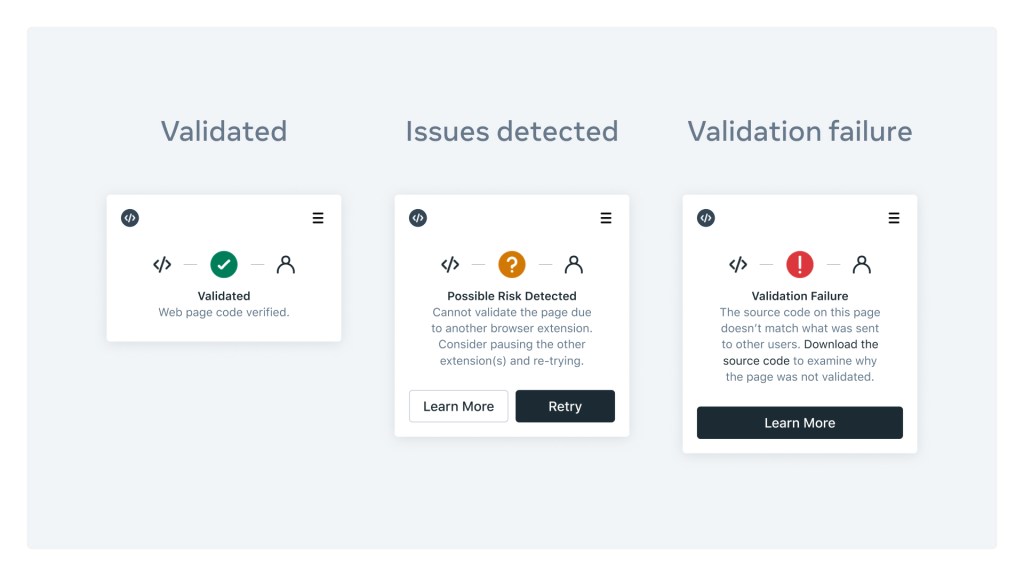 More information about using Code Verify and steps to take in the event of a validation failure or other issues can be found here.

Open source for others to leverage as well

Code Verify is available on GitHub. Open-sourcing the Code Verify extension has a few important benefits. First, it allows other companies, groups, and individuals to apply this same level of transparency to their own applications and freely share new ideas with one another to help improve the feature. Second, it puts the power of transparency squarely in the hands of the people. As a browser extension that exists independently of WhatsApp and its infrastructure, people can see for themselves that the extension hasn’t been tampered with. Third, that same discoverability also protects the extension itself. Since it exists in the public eye, it can benefit from the protections of a watchful open source community.

We believe that with Code Verify, we are charting new territory with automatic third-party code verification, particularly at this scale. We hope that more services use the open source version of Code Verify and make third-party verified web code the new norm. And in doing so, we hope this helps bring additional security protections to people all over the world and move the entire industry forward.