Our ability to build communities at Facebook depends on people being connected. Communities come in all sizes and across all regions, but many aren’t currently being served by traditional methods of connectivity. Urban areas don’t have enough bandwidth to support more devices running more data-heavy experiences, while in remote communities the technology is often too expensive to deploy.

We are working to help change that. We know that collaboration — being open — helps us increase the pace of innovation. For example, participating alongside leading operators and other ecosystem leaders as part of the Telecom Infra Project (TIP) is helping us bring together a community to help solve the connectivity challenges of communities around the world—creating community to connect communities.

We’re also focused on developing next-generation technologies that can help bring the cost of connectivity down to reach the unconnected and increase capacity and performance for everyone else. We know that there is no silver bullet for connecting the world; no single technology will get the job done.

Rather than look for a one-size-fits-all solution, we are investing in a building block strategy — designing different technologies for specific use cases which are then used together with partners to create flexible and extensible networks. 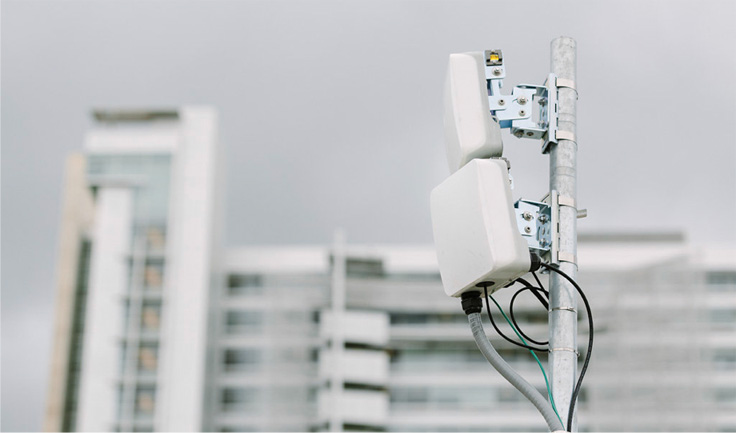 In dense urban regions, we’re working to end dead zones and increase capacity using Terragraph — our custom-designed, multi-node wireless system built to bring high-speed internet connectivity to dense urban areas. Our idea is to extend fiber using wireless instead of more fiber, to build faster networks at a lower cost. It’s a simple concept, but deploying this at scale in a city has never been done before — until now. Facebook has worked with the city of San Jose to launch a first-of-its-kind at-scale deployment to test our system’s capabilities in the city’s downtown corridor. To figure out where to place the nodes, we worked with our computer vision team to run tests of images in San Jose to understand both where we can potentially mount a millimeter-wave (MMW) radio, and where our lines-of-sight are.

We knew going in that the 60GHz channel this data is sent on presents its own challenges: If a tree grows leaves in front of a node, if a temporary construction project starts, or if any number of possible blockers obstruct our line-of-sight, the signal goes away. To fix this, we leveraged Facebook’s software and networking expertise to create software that routes around obstructions in a split second, so the end user won’t notice there was a lapse in connection. We reduce the failover rate to something so small, it’s a blip—unnoticeable on human time scales.

There’s more testing to do before we’re ready to contribute this technology to the wider ecosystem, but we’re really encouraged by our progress so far.

For more remote regions we have to look at ways for connectivity to traverse expanses of land cheaply, which is why Facebook is developing MMW and aircraft technology that can beam connectivity through the stratosphere — extending fiber installations at lower cost than trying to dig fiber to these remote regions. One way we’re doing this is through Aquila, our solar powered unmanned aerial vehicle (UAV), which had its first test flight last year and will be undergoing further flight testing in 2017. But we knew we didn’t just need to design and build a plane — the MMW technology needed an update too. Last year, our team broke a MMW record while testing a terrestrial point-to-point link in Southern California: a record data rate of nearly 20 Gbps over 13 km. To put this in perspective, our demonstrated capacity at the time was enough data to stream almost 1,000 ultra-high-definition videos at the same time.

And we’ve done it again.

Earlier this month, our team set three new records in wireless data transfer—demonstrating a record point-to-point data rate of 36 Gbps over 13 km with MMW technology, and 80 Gbps between those same points using our optical cross-link technology. That’s up to 4,000 ultra-high-definition videos simultaneously. We also used the technology to demonstrate 16 Gbps simultaneously in each direction from a location on the ground to a circling Cessna aircraft over 7 km away. This ground-to-air record modeled, for the first time, a real-life test of how this technology will be used. This technology is applicable to a number of Facebook’s connectivity solutions. It can serve as a terrestrial backhaul network to support access solutions like OpenCellular, or as a reliable backup to free space optical solutions such as the laser communications gimbal and optical detector in case of fog and clouds. Ultimately, the point-to-point MMW radio link is also expected to serve as the connection between a ground station and Aquila.

The technologies described above clearly take some planning, but one of Facebook’s goals is to not only connect communities, but to connect them when they need it most. For situations where a faster deployment is needed — such as a natural disaster, when infrastructure has been damaged or destroyed but some fiber lines still work — we’ve developed what we call Tether-tenna. It’s a small helicopter tethered to a fiber line and power—essentially, insta-infrastructure. If the fiber line is still good to a certain point, we can make a virtual tower by flying a Tether-tenna a few hundred feet from the ground. When completed, this technology will be able to be deployed immediately and operate for months at a time to bring back connectivity in case of an emergency — ensuring the local community can stay connected while the in-ground connectivity is under repair. This is still in the early stages of development and lots of work is needed to ensure that it will be able operate autonomously for months at a time, but we’re excited about the progress so far.

We’ve made a lot of progress on our connectivity programs in the last year, and we’re excited to see what comes next. Developing next-generation technology takes a lot of testing and iteration — we know these projects will take a decade to develop. But if we’re going to build communities that work for everyone, that starts with building connectivity that works for everyone. And we’re just getting started.