Processing large-scale data is at the heart of what the data infrastructure group does at Facebook. Over the years we have seen tremendous growth in our analytics needs, and to satisfy those needs we either have to design and build a new system or adopt an existing open source solution and improve it so it works at our scale.

For some of our batch-processing use cases we decided to use Apache Spark, a fast-growing open source data processing platform with the ability to scale with a large amount of data and support for custom user applications.

A few months ago, we shared one such use case that leveraged Spark’s declarative (SQL) support. In this post, we will describe how we used the imperative side of Spark to redesign a large-scale, complex (100+ stage) pipeline that was originally written in HQL over Hive. In particular, we will describe how to control data distribution, avoid data skew, and implement application-specific optimizations to build performant and reliable data pipelines. This new Spark-based pipeline is modular, readable, and more maintainable compared with the previous set of HQL queries. In addition to the qualitative improvements, we also observed reductions in both resource usage and data landing time.

Natural language processing is a field of artificial intelligence concerned with the interactions between computers and human languages. Computers can be trained to model a language, and these models are used to detect and correct spelling errors. The N-gram language model is the most widely used language modeling approach. An N-gram is usually written as an N-word phrase, with the first N-1 words as the history, and the last word predicted as a probability based on the N-1 previous words. For example, “Can you please come here” contains 5 words and is a 5-gram. Its history is “Can you please come.” Based on that history, an N-gram language model can compute a conditional probability of the word “here.”

Language models trained with large datasets have better accuracy compared with ones trained with smaller datasets. The possibility of covering ample instances of infrequent words (or N-grams) increases with a larger dataset. For training with larger dataset, distributed computing frameworks (e.g. MapReduce) are generally used for better scalability and parallelizing model training.

We had originally developed a Hive-based solution for generating an N-gram language model. The N-gram counts were sharded by the last-two-word history, and C++ based TRANSFORMs were used to estimate partial language models and save them in Hive. Separate sub-models were built on different data sources, each triggered by a Hive query. Later, all these sub-models were combined in a final job using an interpolation algorithm using weights for each sub-model. Below is a high-level overview of the pipeline: 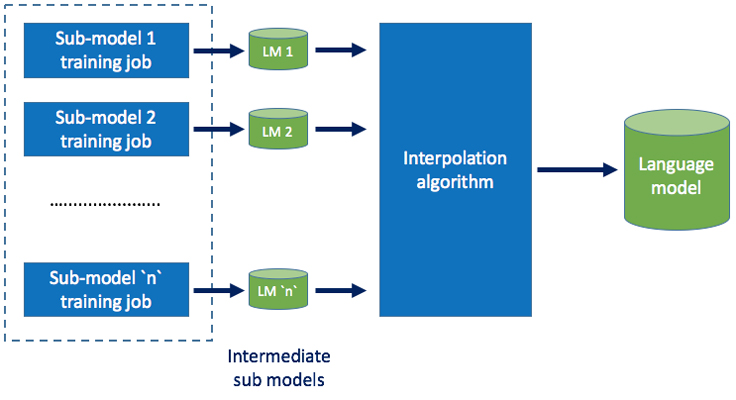 The Hive-based solution obtained reasonable success in building language models: It could comfortably construct 5-gram language models when trained with a few billion N-grams. As we tried to increase the size of training dataset, the end-to-end time for running the pipeline was in an unacceptable range.

Hive provides a SQL-based engine for easily writing queries, which automatically get transformed into MapReduce jobs. For training language models, representing the computation as a SQL query wasn’t a natural fit due to following reasons:

As an alternative, writing Hadoop jobs provides more freedom to developers in terms of expressing the computation, but takes a lot more time and requires expertise in Hadoop.

Spark comes with a Domain Specific Language (DSL) that makes it easy to write custom applications apart from writing jobs as SQL queries. With the DSL, you can control lower-level operations (e.g., when data is shuffled) and have access to intermediate data. This helps in implementing sophisticated algorithms achieve more efficiency and stability. It also enables users to write their pipeline in a modular fashion rather than one monolithic SQL string, which improves the readability, maintainability, and testability of the pipeline. These advantages led us to experiment with Spark.

Rewriting the C++ logic — which had implementations for language model training algorithms — in Scala or Java would have been a significant effort, so we decided to not change that part. Just like Hive, Spark supports running custom user code, which made it easy to invoke the same C++ binaries. This allowed for a smooth transition since we didn’t have to maintain two versions of the C++ logic, and the migration was transparent to users. Instead of using Spark SQL, we used the RDD interface offered by Spark because of its ability to control partitioning of the intermediate data and manage shard generation directly. Spark’s pipe() operator was used to invoke the binaries.

At a higher level, the design of the pipeline remained the same. We continued to use Hive tables as initial input and final output for the application. The intermediate outputs were written to the local disk on cluster nodes. The entire application is approximately 1,000 lines of Scala code and can generate 100+ stages (depending on the number of sources of training data) when executed over Spark.

We faced some scalability challenges when we tested Spark with a larger training dataset. In this section, we start off with describing the data distribution requirements (smoothing and sharding), followed by the challenges it led to and our solution.

N-gram models are estimated from N-gram occurrence counts in the training data. Since there can be N-grams absent in the training data, this can generalize poorly to unseen data. To address this problem, many smoothing methods are used that generally discount the observed N-gram counts to promote unseen N-gram probabilities and use lower-order models to smooth higher-order models. Because of smoothing, for an N-gram with history h, counts for all N-grams with the same history and all lower-order N-grams with a history as a suffix of h are required to estimate its probability. As an example, for the trigram “how are you,” where “how are” is the history and “you” is the word to be predicted, in order to estimate P(you| how are), we need counts for “how are *,” “are *,” and all unigrams (single-word N-grams), where * is a wildcard representing any word in the vocabulary. Frequently occurring N-grams (e.g., “how are *”) lead to data skews while processing.

With a distributed computing framework, we could partition N-gram counts into multiple shards so they could be processed by multiple machines in parallel. Sharding based on the last k words of an N-gram’s history can guarantee that all N-grams longer than k words are decently balanced across the shards. This requires the counts for all the N-grams with length up to k to be shared across all the shards. We put all these short N-grams in a special shard called “0-shard.” For example, if k is 2, then all the unigrams and bigrams extracted from the training data are put together in a single shard (0-shard) and are accessible to all the servers doing the model training.

For large datasets, two-word history sharding can generate a large 0-shard. Having to distribute a large 0-shard to all the nodes can slow down overall computation time. It can also lead to potential job instability as it is hard to predict the memory requirements upfront, and once a job is launched it can run out of memory while in progress. While allocating more memory upfront is possible, it still does not guarantee 100% job stability, and can lead to poor memory utilization across the cluster since not all instances of the job would need more memory than the historical average.

While trying to move the computation to Spark, the job could run with small workloads. But with larger datasets, we observed these issues:

Progressive sharding uses an iterative method to address data skew. In the first iteration, we start with one-word sharding where only unigram counts need to be shared across all the shards. Unigram counts are much smaller than bigram counts. This mostly works fine except when a few shards are extremely large. For example, the shard corresponding to “how to …” will be skewed. To tackle this, we check the size of each shard and only process those shards smaller than a certain threshold.

In the second iteration, we use two-word sharding, which distributes N-gram counts based on two-word history. At this stage, we only need to share N-gram counts for bigrams excluding those already processed in the first iteration. These bigram counts are much smaller than the complete set of bigram counts and therefore are much faster to process. As before, we check the size of each shard, and only process those smaller than the threshold. Those left over will go to next iteration using three-word history. In most cases, three iterations are sufficient for very large datasets. 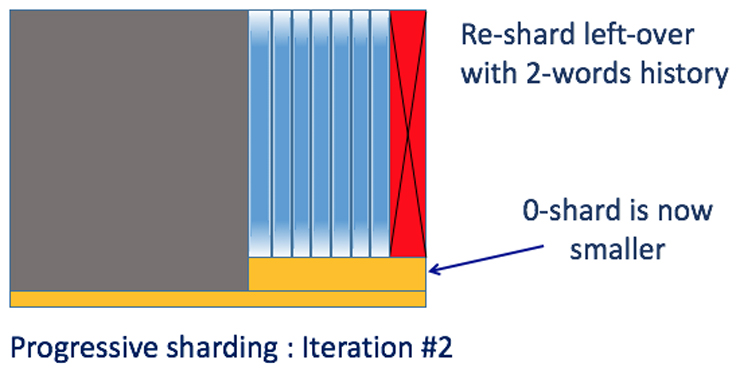 For the first iteration, we use a pre-specified number that is sufficiently large so that most of the shards generated are small in size. Each shard is processed by a single Spark task. Since 0-shard is very small in this iteration, having lots of small shards does not affect the efficiency. In later iterations, the number of shards are determined automatically by the number of leftover N-grams.

Both of these solutions were possible due to the flexibility offered by the Spark DSL. With Hive, developers do not have control over such lower-level operations.

With the Spark-based solution, we could also automatically optimize the workflow of steps performed by the application based on the input configuration. For example, if the user did not specify to use entropy pruning, the application would skip model re-estimation. If the user specified count-cutoff in the configuration, the application would collapse many low-count N-grams into single one with a wildcard placeholder in order to reduce storage. These optimizations saved computational resources and produced the trained model in less time.

We used following performance metrics to compare the Spark pipeline against the Hive pipeline:

The following charts summarize the performance comparison between the Spark and Hive jobs. Note that with Spark the pipeline is not a 1:1 translation of Hive pipeline. It has several customizations and optimizations that contributed to the better scalability and performance. 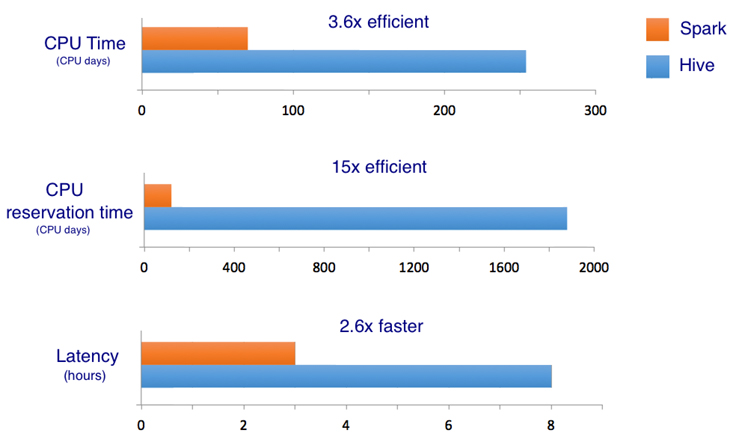 Spark-based pipelines can scale comfortably to process many times more input data than what Hive could handle at peak. For example, we trained a large language model on 15x more data, which generated a language model containing 19.2 billion N-grams within a few hours. Ability to train with more data and run experiments faster leads to higher-quality models. Larger language models generally lead to better results in related applications, as we observed in our own experience.

The flexibility offered by Spark helped us to:

Facebook is excited to be a part of the Spark open source community and will work together to develop Spark toward its full potential.