Neural networks designed for sequence predictions have recently gained renewed interested by achieving state-of-the-art performance across areas such as speech recognition, machine translation or language modeling. However, these models are quite computationally demanding, which in turn can limit their application.

In the area of language modeling, recent advances have been made leveraging massively large models that could only be trained on a large GPU cluster for weeks at a time. While impressive, these processing-intensive practices favor exploring on large computational infrastructures that are typically too expensive for academic environments and impractical in a production setting, limiting the speed of research, reproducibility, and usability of the results.

Recognizing this computational bottleneck, Facebook AI Research (FAIR) designed a novel softmax function approximation tailored for GPUs to efficiently train neural network based language models over very large vocabularies. Our approach, called adaptive softmax (more details in the paper), circumvents the linear dependency on the vocabulary size by exploiting the unbalanced word distribution to form clusters that explicitly minimize the expectation of computational complexity. This approach further reduces the computational cost by leveraging the specificities of modern architectures and matrix-matrix vector operations both at train and test time. This makes it particularly suited for GPUs whereas most previous approaches, such as hierachical softmax, NCE, and importance sampling, have been designed for standard CPUs.

FAIR also developed and is open-sourcing a library called torch-rnnlib that allows researchers to design new recurrent models and test these prototypes on GPUs with minimal effort. It also allows seamless access to fast baselines through the torch.cudnn bindings. Several standard recurrent networks such as RNN, LSTM and GRU are already implemented and we show below how one can design new recurrent networks with this library.

These tools and techniques were then applied together against standard benchmarks, such as EuroParl and One Billion Word, which are complex training environments due to the vocabulary sizes used which prohibited us from fitting both a large model and full softmax on GPU. The results demonstrated that we can process 12,500 words/sec on a single GPU, bringing a large gain in efficiency over standard approximations, decreasing the time from experiment to results, all while achieving an accuracy close to that of the full softmax. This will allow for engineers and researchers across academia and industry to train state-of-the-art models with limited resources in short periods of time.

Building a recurrent model with torch-rnnlib

While they are many ways to define recurrent models, we follow this definition: Recurrent networks model sequences of variables over discrete time. It follows the Markov property, that is its future state only depends on its present state.

where h represents the (hidden) internal state of the network and f is the sigmoid function. More sophisticated recurrent models have been proposed since then such as the LSTM, GRU or SCRNN.

A good example of application is language modeling, which we now introduce and will be the focus of the remainder of this post.

What is language modeling?

How to build a standard model with Torch-rnnlib

We give three different APIs for constructing a network with recurrent connections:

Build your own recurrent model

You can also create your own model by defining a function that acts as the cell as well as an initialization function for the cell’s state. There are pre-defined cells in rnnlib.cell such as LSTMs, RNNs, and GRUs. Here’s how you can build an RNN from scratch:

Train it on GPU

Since torch-rnnlib adheres to the nn module interface, simply call :cuda() on the model to pull it to GPU. The goal of rnnlib is to allow the user flexibility in creating new cells or using fast baselines. On this end, if you use either the first or second API for constructing recurrent networks in the above section you can easily use cudnn to greatly speed up your network. For the nn.{RNN, LSTM, GRU} interface, simply call the constructor with usecudnn = true:

For the second API, simply replace rnnlib.makeRecurrent with rnnlib.makeCudnnRecurrent and change the cell function to a cell string that is present in the cudnn API. For example: 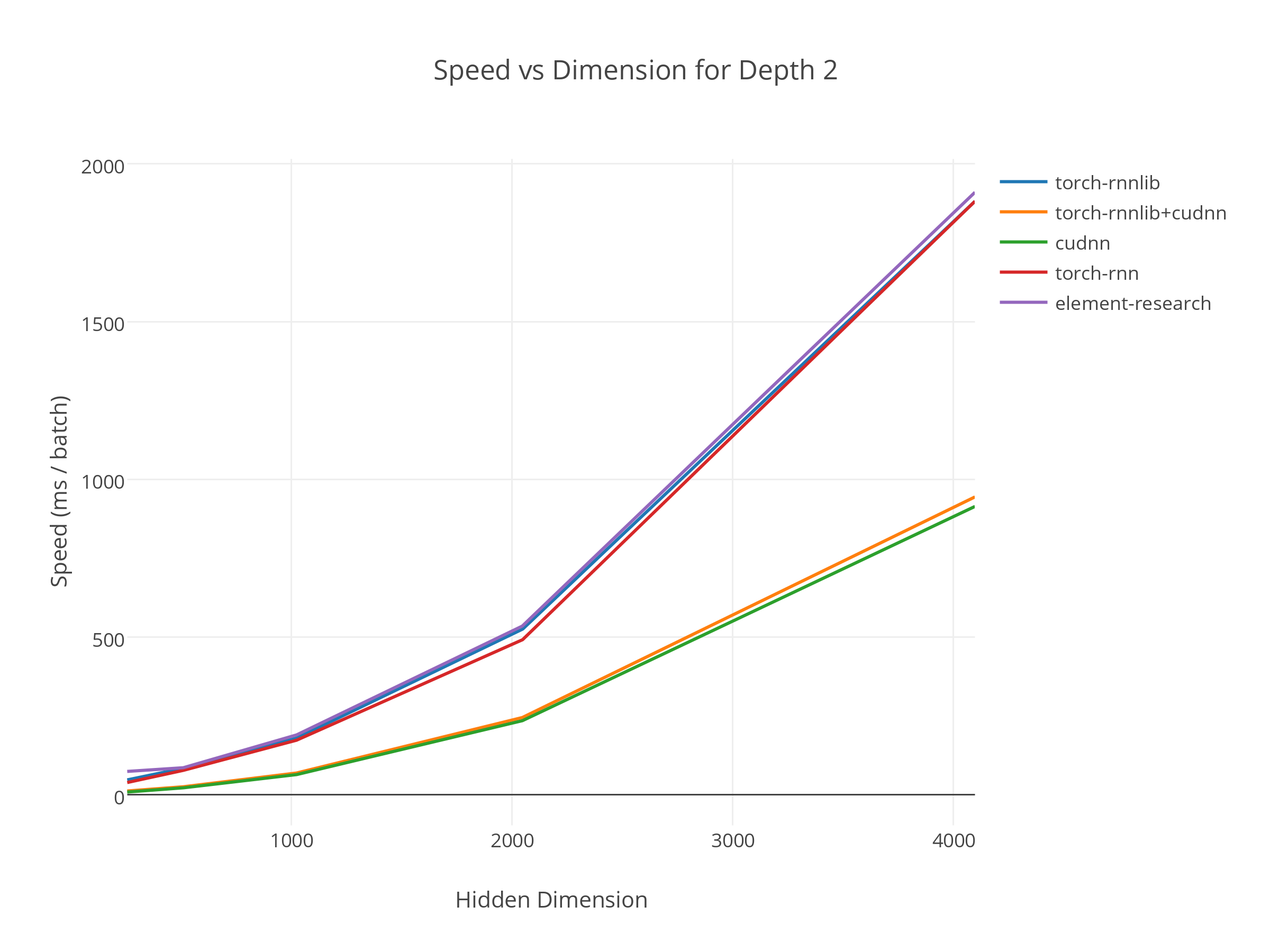 Figure. Comparison of running time as a function of size of the hidden layers between torch-rnnlib and other torch library. We show it with and without using Cudnn. We use an LSTM with 2 layers.

When dealing with large output space (like in language modeling), the classifier can be the computational bottleneck of the model. Many solutions have been proposed in the past (hierarchical softmax, noise contrastive estimation, differentiated softmax) but they are usually designed for standard CPUs and rarely take full advantage of the specificity of GPUs.

We develop a new approximation called the adaptive softmax: A softmax that adapt its computational budget to the distribution of the data. It balances between a good approximation and fast running time by making the most frequent classes faster to access but provides them with more resources. More precisely it learns a k-way hierarchical softmax that takes into account the architecture of the GPUs to assign computation efficiently. This computation allocation can be solved exactly using a simple dynamic programming algorithm. Several tricks have been used to further the computational burden of the classifier: we use shallow trees to avoid sequential computation and we fix a minimum number of classes per cluster to avoid wasting GPUs parallel computation power.

As shown in Table 1, the adaptive softmax almost match the performance of the full softmax while being significantly faster. It also outperforms other approximations on GPUs.

Table 1. Performance on Text8. The lower ppl the better. 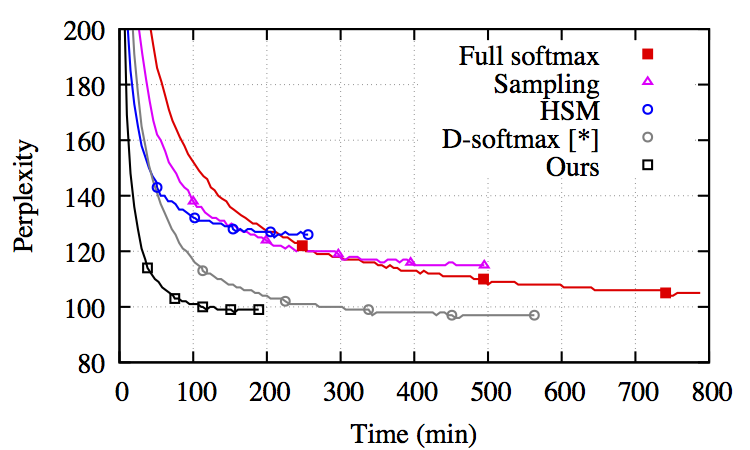 Figure. Convergence of language model with different softmax approximations. It is built on top of an LSTM.

In terms of technical details, beside the adatpive softmax, we use a relatively standard setting: For our small model we use a LSTM with 1 layer and 2048 units each and for the larger one 2 layers with 2048 neurons each. We train the model using Adagrad (citation needed) and a L2 regularization for the weights. We use a batch size of 128 and we set the back-propagation window size to 20.

Concerning the Adaptative softmax, we use the optimal setting for the distribution of the train set of 1B words, that is 4 clusters with a dimension reduction of x4 over each cluster (see the paper for details).

Table 2. Comparison on 1B word in perplexity (lower the better). Note that Jozefowicz et al., uses 32 GPUs for training. We only use 1 GPU.