Now, looking back at the first half of 2016, we've been busy. We've already deployed thousands of Wedges into production, and Wedge 100 will go through a similarly rapid deployment as well. Given that, the developer community knows that Facebook network switches have been tested and hardened in our production data centers — thus, starting late last year and into 2016, we've seen several groups and companies start to experiment and develop on top of Wedge. The openness of the hardware and available software building blocks are pushing the networking developer community forward.

Late last year, Big Switch Networks helped start this movement by providing a version of OpenNetworkLinux (ONL) packaged with Broadcom's OpenNSL and Facebook's FBOSS that can be downloaded and loaded onto a Wedge. This allows other developers to start writing software on top of a Wedge and gain experience programming a networking ASIC — all while providing an example of working production code in FBOSS. This ONL-based platform was used by several other companies, outlined below, in their own demos and proof-of-concepts.

At the OCP Summit this March, a number of companies demoed the software that they built on top of Wedge:

At Facebook, we've also been demo'ing Wedge as a development platform at a couple of conferences, specifically SCaLE14x and the Embedded Linux Conference. We had a stack of Wedges running all open source software and showing some forwarding work based on open-source FBOSS and open source software.

Wrapping up the first half, at the recent OCP engineering workshop in San Jose, we were excited to share that a new networking startup, SnapRoute, announced and demoed their support of FlexSwitch software on top of both Wedge and Wedge 100 (as well as a Mellanox-based switch, another Broadcom-based switch, and the Barefoot simulator). FlexSwitch is all open-source software, and SnapRoute is contributing FlexSwitch to OCP. This contribution continues the move by the OCP networking project up the stack to higher layer networking software, and FlexSwitch is the first full L2/L3 open source networking stack officially available on top of Facebook Wedge (and Wedge 100, once it's generally available). 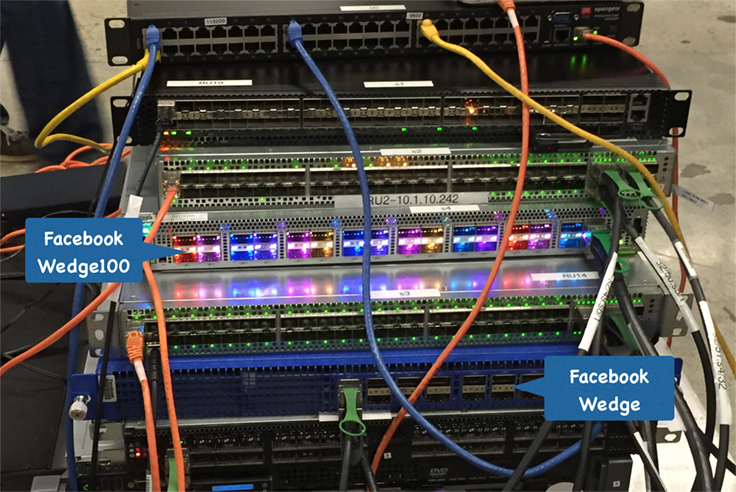 FlexSwitch is a package that can be installed on a Wedge running OpenNetworkLinux — see the uname output below:

Overall, we see a huge opportunity for developers in this open and disaggregated networking ecosystem. And specifically, we can see it growing on Wedge and Wedge 100 — from large ISPs developing their own software, to large open-source projects, such as those from Canonical, to new startups like SnapRoute.

The future of networking is open and disaggregated, and we encourage everyone to try it out on Facebook Wedge and other forthcoming Facebook networking switches.