[N.B.: The note below profiles some research that was conducted last year at Facebook based on the old News Feed. The resulting paper was recently presented at the International AAAI Conference on Weblogs and Social Media (ICWSM) conference in May 2009, where it received the Best Paper award. The full paper can be found at http://cameronmarlow.com/papers/gesundheit-modeling]

How do certain celebrities, movies, or bands become really popular? It’s a mystery that intrigues everyone from high school students and academic researchers to ad agency executives. Some people, like author Malcolm Gladwell of “The Tipping Point”, contend that popularity is driven by a few key influencers who get everyone else to join them. Others, like sociologist Duncan Watts, give less credit to individual trendsetters, arguing that the key lies in vast groups of closely connected people who are easily convinced to try something new.

Facebook is a great place to test these theories. If you have ever become a fan of a Facebook Page that grew to be wildly popular–or that never attracted as big a following as you expected–you’ve probably wondered how that came to be. Several of us on the Facebook Data Team have been analyzing the ways fan support has mobilized across thousands of Pages, covering topics as diverse as TV shows such as “Battlestar Galactica,” musicians such as Snoop Dogg and even philosophers such as Plato. After identifying Pages that attracted a lot of fans, we analyzed how each new wave of fans arrived. Thanks to Facebook’s News Feed, people constantly learn what Pages their friends are “fanning,” creating the opportunity to check out those Pages and become a fan, too.

For example, I might fan a Page after noticing my fiancée fanned it first; three of my friends might follow suit after seeing that I’ve fanned that Page; and so on, creating a longer chain of connections each time. This sequence of connections is like a domino effect created by News Feed, enabling fan actions to evolve into ultra-long chains.

What’s even more striking is how a flurry of fanning or short chains, all started by many people acting independently, often merges together into one gigantic group of friends and acquaintances. This merging happens when one person fans a Page after seeing two or more friends fan that same Page. A case in point is a Page devoted to a popular European cartoon, Stripy. The diagram below shows the cartoon’s close-knit communities of fans in both Bosnia (blue) and Slovenia (yellow). A few fans serve as the “bridge” that brings the two groups together. A third cluster of Croatian fans (green) hasn’t yet found its connecting bridge. Finally, there are a few fans from other countries (grey), perhaps Bosnian and Slovenian expatriates! 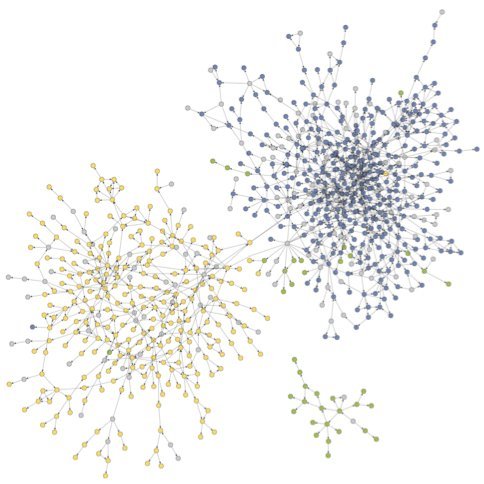 In fact, more than 90% of a popular Page’s fans can be part of a single group of people who are all somehow connected to one another. Typically, each of these large, close-knit communities contains thousands of separate starting points–individuals who independently decide to fan a particular Page. No single person is accountable for the popularity of a Page; instead, we consistently see that roughly 15% of all fans arrived independently and started their own chains (which merge together as the rest of the fan base takes shape). These patterns hold for Pages with a few thousand fans and for those with more than 50,000.

Eventually, we hope to gain an even deeper understanding of the ways that popularity spreads. From our work so far, it appears that the most explosively popular Pages catch on as closely connected groups of like-minded people contact one another. Individual influencers aren’t nearly as crucial to a Page’s success: Pages grow if people are easily engaged by the content, not because of the actions of a couple trendsetters. That may also be true in other areas–such as the ways that new Platform Applications catch on–or a different dynamic might apply. We’ll be analyzing word-of-mouth (or should we say, word-of-mouse) referrals to find out.